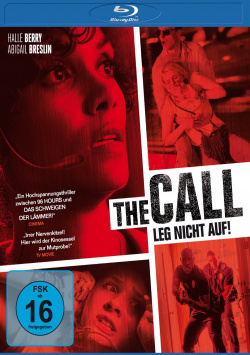 Film: Actually Jordan Turner (Halle Berry) is an absolute professional at her work as an operator in the police call center of Los Angeles. She has often been empathetic but rational in her way of helping to prevent crime and sending people in need the help they longed for. But a single small mistake throws her completely off course, as it leads to a girl being killed by a burglar before the police can arrive to save her. Even after six months, Jordan still hasn't dealt with the incident. Instead of taking emergency calls, she now works as a trainer. But just as she guides her new students through the emergency call centre, she witnesses a desperate cry for help: young Casey (Abigail Breslin) was kidnapped by a man and is now in the trunk of his car. Since her colleague is completely overwhelmed by the situation, Jordan now has to put all her fears aside to help this girl. When she actually manages to identify the kidnapper's vehicle, Casey's rescue seems within her grasp. But then the case takes a dramatic turn and the horror seems to repeat itself once more...

With the atmospheric horror shocker "Session 9" and the great Mysetry thriller "Der Maschinist" Brad Anderson has proven himself to be a master of tension cinema. But since his films never attracted a large audience despite mostly very good reviews and his last work "Die Herrschaft der Schatten" was completely lost, the director had to make do with jobs at TV series like "Fringe", "Boardwalk Empire" or "The Killing". With "The Call - Leg nicht auf" he has finally staged another feature film and proves again, at least in the first half of the film, how cleverly he can build up atmospheric and captivating tension.

The not always logical behaviour of the protagonists isn't really noticeable yet. Too feverish is the fever with Jordan as to whether she will succeed in finding Casey's kidnapper and leading the police to the desperate girl before another terrible blood crime occurs. The coincidences that benefit the killer, however, take over with time. It's a bit unbelievable that only two policemen are really following the heels of the kidnapper and spend a lot of time on forensics instead of a large contingent sealing off the area. But this can be dismissed as a dramaturgical necessity if necessary, as it can prolong the hunt and further tighten the tension screw.

However, in the last third the whole thing takes on almost ridiculous dimensions, especially when Jordan leaves her station and goes on a vigilante trip alone. Here, the thriller not only bids farewell to every form of logic, it also loses a lot of suspense due to the heavily forced plot turns. The entertainment value is still at a good level, but the quality of Anderson's earlier films is now far from the level of "The Call - Don't Leg up" at the latest.

Actingly, the film doesn't offer any masterpieces, but Oscar winner Halle Berry and former "Little Miss Sunshine" Abigail Breslin do get the best out of their badly clichéd roles. Only Michael Eklund is really good as a psychopathic killer - but only until the last act, when his performance seems to have been inspired by "The Silence of the Lambs".

The bottom line is "The Call - Don't Hang Up" is average thriller merchandise that gives away its initial potential in favor of stale genre clichés, illogical character behavior, and a badly exaggerated finale. If you are looking for a simple and densely staged thrill, you can't really do anything wrong here. But if you're also hoping for a consistently clever story, interesting characters and a convincing finale, you'd better hang up quickly. Nevertheless, the film has enough entertainment value overall, so that in the end there is enough for a "worth seeing"!

Picture + sound: The Blu-ray presents a very lively DTS-HD 5.1 mix, which has a pleasant dynamic especially in the scenes in which the police hunt the kidnapper across the city. The dialogues are mixed clearly and at all times well understandable, which is why there is really no reason to complain here. The same applies to the visual implementation, which is convincing with its atmospheric colouring, high sharpness of detail and well-coordinated black values. Good!

Extras: In addition to the trailer, the bonus material consists of four Making of Featurettes and five edited or extended scenes. The short documentaries take a look at the making of the film (ca. 14:53 min.) and the stunts (ca. 6:56 min.) and also visit the sets of the killer's hideout (ca. 3:27 min.) and the call center (ca. 4:51 min.). The promo character of these features is pleasantly limited, but the information content is relatively high. The edited and extended scenes (approx. 5 min.) are rather negligible. Especially the only in nuances alternative ending doesn't offer any surprise.

Fazit: "The Call - Leg nicht auf!" begins strongly, but unfortunately it clearly diminishes towards the end. Nonetheless, Brad Anderson manages to create an entertaining thriller with good actors and some good moments of tension, which is the right food for an entertaining home cinema evening. The Blu-ray is technically well implemented and the making of material is also impressive. Recommended