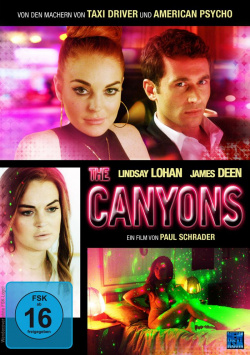 Content: Movie producer Christian (James Deen) has everything you could wish for. Money, a chic house, a well-run business and an attractive girlfriend. But everyday life in luxury becomes extremely boring for him again and again, which is why he is always on the lookout for variety, especially in sexual terms. In addition to smaller affairs, he invites strangers to his home, where they can experience exciting sex adventures with him and Tara (Lindsay Lohan). Tara is happy to accept these adventures, as Christian offers her a life she has only dreamed of as a little actress. But then her ex Ryan (Nolan Gerard Funk) shows up at the casting for Christian's latest film and thus evokes old feelings in Tara. When jealous Christian gets wind that Tara might have an affair with Ryan, he starts a perfidious power play with which he doesn't only want to destroy his adversary professionally...

With "The Canyons" director Paul Schrader and screenwriter Bret Easton Ellis have taken a big risk. A large part of the production costs of about a quarter of a million dollars, which are very low by Hollywood standards, were provided from their own resources. The rest was raised by crowd funding. This allowed them to realize their vision independently of the influence of large studios. Schrader and Ellis were not exactly on the safe side with the decision to cast porn star James Deen and Lindsay Lohan, who is notorious for their very difficult and rather destructive behaviour. But with two experts in their field, one could actually assume that they knew what they were getting into and that the risk would pay off in the end. After all, Schrader wrote the classic "Taxi Driver" and with films like "A Man for Certain Hours" or "Cat People" also revealed great talent as a director, while Ellis wrote a great moral painting with his cult novel "American Psycho". When these two creative minds come together, then something good must actually come out of it.

In some respects this can also be felt. In its best moments, "The Canyons" is a cynical swan song about the machinations in Hollywood and the superficialities and pompous egos that prevail there. Unfortunately, Ellis didn't work out this well done aspect in his script, but rather concentrates on the sexual power games between Christian and Tara. The fact that Schrader then staged the sex scenes very open-heartedly, but still very pompously, finally makes the film seem like one of the countless erotic thrillers that filled the shelves in the video stores in the 1990s after the success of "Basic Instinct".

In view of the rather weak script, the actors can no longer do much either. Even though Lindsay Lohan's courage to move freely and James Deen's acting abilities beyond the sex scenes can be attested to, they never manage to breathe real life into their characters. Fortunately, this doesn't have a too negative effect on the movie, as Christian and Tara are supposed to be very superficial characters who are most important to themselves. And that's what they convey with their somewhat undercooled, selensless game.

Picture + sound: Since only a data-reduced press sample was available for the test, the final picture and sound quality cannot be evaluated at this point.

Result: "The Canyons" is a risk in several respects: on the one hand, director Paul Schrader and screenwriter Bret Easton Ellis have put a lot of their own money into the low budget production in order to be completely independent of large studios. On the other hand, they have cast the drama with a porn star and a scandalously courted diva. A big risk that only paid off to a limited extent. The movie has its moments dramaturgically and is very stylish. But the script is just too weak to be able to offer more at the end than just empty, pompous eroticism. For Lindsay Lohan fans and friends of American B-thriller dramas but still worth seeing!