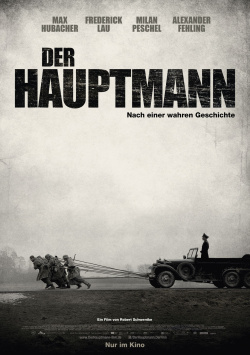 In the last days of the Second World War, the young private Willi Herold (Max Hubacher) flees from his safe shooting. On the run from the officer Junker (Alexander Fehling) he finds an officer uniform in an abandoned car, which he puts on without hesitation. He credibly succeeds in playing the role of Captain Herold, which is why more and more scattered soldiers gather around him over the next few days. More and more the young man becomes involved in the role and its alleged mission and soon he runs the risk of finally falling for the intoxication of power that the uniform gives him…

With "Der Hauptmann" director Robert Schwentke ("R.E.D", "Die Bestimmung - Allegiant") from Hollywood returns to German cinema. In unagitated black and white pictures he tells a story based on true events about the Nazi regime from the perpetrator's perspective. This is a daring undertaking, as on the one hand the perpetrators must not be glorified, on the other hand a certain access to the characters should be given to the viewer. Schwentke has solved this difficult degree hike well by allowing the main character to undergo a slow but very drastic transformation. When the viewer meets Willi Herold, he is a young man desperately fighting for his life. Especially at the beginning this makes some of his morally reprehensible actions at least understandable.

For a long time he has the sympathies of the audience on his side, until one notices that he is no longer concerned solely with the protection of his life, but that he has been corrupted by the power that gives him the uniform. At the latest, the moment this realization begins, the film becomes a very unpleasant, but also intense experience. It is a film that stirs up, especially since the underlying theme is one that is not concluded with the end of the Second World War. Even if a certain distance between the events and the viewer is created by the black-and-white look and the equipment, this is easily overcome by the topicality of the topic and hits the viewer in the middle of the market.

"Der Hauptmann"  has some small lengths and dramaturgical weaknesses, but overall Schwentke has delivered a very strong film, which doesn't leave its audience cold, which possesses a certain relevance and thus inspires reflection and discussion. That's clearly what it's all about: Absolutely worth seeing!  ]