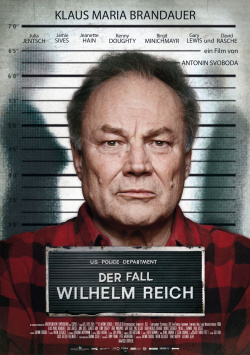 The Case of Wilhelm Reich

After fleeing from the Nazis in the 1930s, the Austrian psychiatrist and border researcher Wilhelm Reich (Klaus Maria Brandauer) tries to continue his not uncontroversial research in the USA. But here too Reich soon finds himself exposed to hostility and persecution. At the latest, when he presents his theory of the life energy, which he calls orgone, to the public and carries out experiments with the orgone accumulator created by him, he is targeted by the government of communist hunter McCarthy and the FDA, the American health authority. But although he is repeatedly summoned to court and forbidden to work with the orgone accumulator, Reich does not allow himself to be intimidated so easily. With the help of his daughter Eva (Julia Jentsch) and his wife Ilse (Jeanette Hain), Reich wants to continue to put his ideas into practice and help his patients with his unconventional methods. But even the greatest idealism cannot do anything about the powerful system that sees in him and his research a danger to society and American values…

With "The Fall of Wilhelm Reich" director Antonin Svoboda ("Always Never at the Sea") dedicates himself to the subject of the "The Fall of Wilhelm Reich".) already for the second time after his 2009 documentary "Wer hat Angst vor Wilhelm Reich", the controversial psychoanalyst and visionary who with his attitudes towards sexuality or holistic thinking has repeatedly encountered resistance and rejection not only from his colleagues. Reich was a very provocative, complex mind, which you can hardly do justice to in a two hour film. The fact that Svoboda succeeds in doing this quite well is primarily due to the very good play of Klaus Maria Brandauer, who takes his own personality back and almost completely disappears into his role.

It's thanks to Brandauer that the movie leaves a strong impression in the end. Because the direction itself is, compared to its subject matter, unfortunately a bit too well-behaved and slow to be able to captivate during the whole running time. The story on which Svoboda concentrates is interesting and offers many discussion approaches which are worth thinking about and talking about after the film. But apart from the strong performance of the main actor and the great pictures of cameraman Martin Gschlacht, some aspects of the production seem relatively weak. Especially the enemy images are drawn quite clichéd and seem as if they had sprung from a dusty film noir. When it comes to Reich's theses, the film is very strong. But when it comes to his persecution and his private life, the story clearly lags behind its potential.

So the curve constantly fluctuates between stirring and boring, between extremely strong and a little too pleasing back and forth. That doesn't make "Der Fall Wilhelm Reich" a bad film for a long time. But at the end it just remains the feeling that this controversial character would have offered the potential for a more edgy, challenging movie and that the director only managed to make the most of this potential in the beginning. Nevertheless: for lovers of engaging acting cinema and for those viewers who are interested in the person of Wilhelm Reich, the drama is still absolutely worth seeing despite some obvious weaknesses!