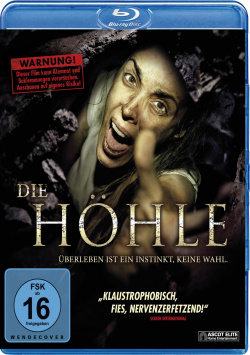 Film: It's supposed to be a relaxing dream holiday for five friends who meet on the Spanish holiday island Formentera. Relax on the white sandy beach, swim in the crystal clear water or hike through the fantastic landscape. It all sounds like pure idyll. But this impression quickly gives way to pure horror when the group discovers a cave and decides to explore it. When they get lost in the narrow corridors, the cave becomes a murderous labyrinth, out of which apparently there is no way out. As supplies run low, the panic drives the trapped to a drastic decision that will turn friends into bitter enemies...

"The Cave" is another representative of the ever-growing found footage subgenre. Like the great cave-horror "The Descent" or "Katakomben" the Spanish filmmaker Alfredo Montero tries to play with the primal fears of his audience through narrow aisles and darkness and to create an oppressive, claustrophobic atmosphere. At times, he succeeds in doing so very well as soon as his protagonists enter the cave that gives the title. Until then, there are the usual trivialities for the found footage movie, which are supposed to show how horror later breaks into the normal everyday life of the characters. Maybe that was an effective stylistic device, but in the thousandth infusion it just seems boring.

What you have to keep in mind is the fact that there is no supernatural horror here, but that the people become true monsters in the extreme situation outlined here. However, it's precisely in this aspect that you also notice that Montero staged his first feature film here. Because in order to make the scene, in which the prisoners decide to take a very extreme step for their own survival, seem really shocking, it would have had to be built a bit more carefully. Although the panic that reigns with the Five becomes quite understandable, it simply goes too fast from the first consideration to the implementation of the said step to actually appear credible.

In addition, the visual implementation only works to a limited extent. The picture is often too blurred and too dark, which is clearly at the expense of the atmosphere. Montero simply exaggerates his claim to make the whole thing as realistic as possible - especially since what the camera has to endure here without suffering serious damage completely contradicts this claim to reality. Of course, the found footage style is just perfect for such a story. But meanwhile there are several representatives of this genre who have shown that you can use the look a little less blurred and still use it effectively.

No question, "The Cave" has some very intense moments where spectators with claustrophobia can stay away. And even after the end of the rather short film you have to think long and hard about what's happening in the cave, because you inevitably ask yourself: how would I act in such a situation? Apart from that, the thriller also has to struggle with some lengths at the beginning and with a lot of blurred and dark shots in the cave, which makes the pleasure of this shocker much less. Therefore: only for Found-Footage fans with extreme claustrophobia extremely effective and absolutely worth seeing. All others should rather insert "The Descent" again!

Picture + Sound: Not only the found footage style, but also the many very dark scenes make sure that the picture doesn't cause much cheering. There is no dirt whatsoever and when the camera is at rest, the sharpness of the image is also shown to advantage. But too often the event is simply too wobbly or too dark to really prove its positive qualities. The sound has some very atmospheric moments to offer, which still support the claustrophobic events well, but otherwise remains rather reserved. All in all, the technical implementation corresponds exactly to what one can expect from a found footage thriller. Good!

Extras: The bonus package includes a Making of (approx. 11:15 min.), as well as short featurettes about the true story behind the movie (approx. 4 min.).), about what frightens the actors (about 2:30 min.), about "the event" (about 3:45 min.), about the shooting on Formentera (about 2:32 min.) and the shooting in a cave (about 3:20 min.). All in all, the viewer is offered a quite decent insight into the production. The trailer and further program tips complete the additional offer.

Fazit: And another Found-Footage movie: "The Cave" doesn't manage to win really new sides to the subgenre and isn't as effective as other cave shocks like "The Descent". But as an oppressive thriller about the abysses of human social behavior in extreme situations the whole thing works quite well at least in the last third. If you can't do much with the nodding camera style of the genre, you'll soon be annoyed here. However, if you get snap breath at the sight of narrow cave passages, the second half of the movie might be really effective horror for you. The Blu-ray presents the film in harmonious picture and sound quality and also offers a good look behind the scenes. Despite a few dramaturgical pitfalls, there is just one more: Recommendable!