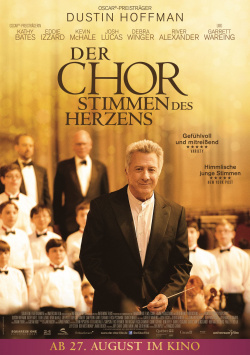 The Choir - Voices of the Heart

The 12-year-old Stet (Garrett Wareing) is truly not an easy student. But the boy has a first-class musical talent, which his teacher (Debra Winger) wants to encourage. After the accidental death of Stets Mutter, the boy is to move to the most renowned choir school in the country, where his talent can be developed and he can learn respect and responsibility at the same time. Through the influence of his father (Josh Lucas), whom Stet only gets to know after his mother's death, the boy gets the coveted place. But the energetic choirmaster Carvelle (Dustin Hoffman) doesn't really want to believe that Stet has the necessary dedication to meet the demands of the school. But in spite of all resistance, not only his love for music grows in him, but also his belief in himself. Stet seems to have finally arrived on the right track - until an evil prank of his classmates could destroy everything...

"The Choir - Voices of the Heart" is absolutely predictable, kitschy, clichéd - and yet it hits the heart. Of course, the staging can be regarded as highly manipulative with the targeted use of musical goose bumps. And probably it's also right that director Francois Girard isn't awarded for narrative finesse here. But even if the film has a lot of deserved criticism to show for it, it can still compensate most of it with the fact that it spreads a tremendous feeling of well-being, which can only be avoided with a good portion of cynicism.

Whoever gets involved in simply getting a nice story with the typical "you can do it" moral offered, could be enchanted by this choral fairy tale. This is ensured not only by the music and the atmospheric visual language, but also by a wonderful Dustin Hoffman and Garrett Wareing, a new discovery as usual. Even if you notice on closer inspection that the boy was doubled in the vocal scenes, his acting performance is really convincing overall. Yes, Stet is the cliché of a rebellious boy who, through his love of music, turns into a true model pupil. But Wareing succeeds in making this character interesting and likeable, so that as a spectator you are feverish with your fate.

"Der Chor - Stimmen des Herzens" doesn't want to achieve more than to make your audience happy with the music and the simply knitted story. And he does that very well. Anyone who puts more emphasis on depth, dreary realism or dramaturgical originality will of course be bitterly disappointed. But if you just want to leave the cinema with a smile on your face and music in your heart, you've come to the right place. And for that there is a more than deserved one: Worth seeing!