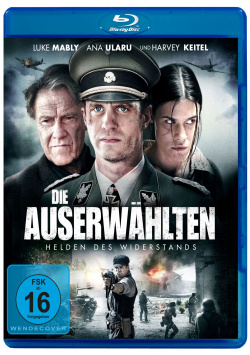 The Chosen - Heroes of the Resistance - Blu-ray

Film: Young Max knows that his grandfather (Harvey Keitel) witnessed World War II. For a school essay he needs the story of a hero and he asks his grandpa to tell him one from the cruel war. After initial hesitation, the old man tells him the story of the young worker Souson from the town of Debrezin in Hungary, who tries everything to avoid attracting attention. When he learns that his sister-in-law Judith is a member of the resistance, he doesn't want her near him anymore, as he sees her as a danger to his own life and that of his wife. Even as the Germans moved ever closer and Jews were more and more persecuted, he vigorously rejected any form of resistance. But then his wife falls seriously ill and when the doctor is no longer allowed to treat them because they are Jews, Souson loses not only his great love but also his faith in justice. He has nothing more to lose and joins Judith and her resistance fighters…

"The Chosen" based on a true story. It remains to be seen how much fiction has crept into the cinematic realization. As a war drama about a man who becomes a resistance fighter in the face of his very personal horror, the film is well realized. One can understand why Souson initially wants to remain unobtrusive, quasi invisible. He works hard and doesn't rebel to protect himself and his wife. The fact that he will later take on such an important role in the resistance is absolutely understandable, given that his wife only does not receive life-saving treatment because she is Jewish. Now he has nothing more to lose and therefore takes up the fight for justice.

The whole thing unfortunately doesn't get along without clichés and lengths. Thus, the story itself is completely unnecessary, especially since it quickly becomes clear who is the hero Max is told about. It seems as if they were looking for a way to get a well-known name like Harvey Keitel into the film. As I said before, this framework action is unnecessary, but does not really disturb (as was the case with the unspeakable "The Trapp Family"). It's just such moments that make the movie seem a bit tenacious overall. But at the latest in the second half the whole thing increases in tempo and tension and the story develops into a really stirring war drama.

The look of the film is pleasantly authentic. Whether this also applies to the dramaturgy cannot be judged by me. So it is quite possible that spectators who are familiar with the events presented here might be disturbed by historical inaccuracies. But for those who simply want to follow an exciting resistance fight, "The Chosen" can be recommended with small deductions in the B-note. Worth seeing!

Picture + sound: The picture quality of the Blu-ray is absolutely right for the 40s look of the movie. The colour scheme accentuates the equipment and also the dirty atmosphere very well, whereby especially the subcooled colours look pleasantly powerful. The image sharpness is on a very good level and even in the darker scenes there are hardly any visible quality losses. The sound is present in a harmonious 5.1 DTS-HD Master Audio Mix, with some good surround moments in addition to the dominant dialogues. Good.

Result: "The Chosen" tells a very exciting and stirring story. It remains to be seen how close it is to actual reality. As a drama about a resistance fighter in the Second World War, the film works very well especially in the second half. The Blu-ray presents the war drama in atmospheric picture and sound quality. Only the missing bonus material does not leave a positive impression. All in all this is enough for a good one: Recommended!