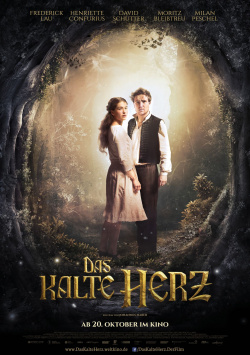 The poor charcoal burner son Peter (Frederick Lau) lives with his parents in simple conditions in the medieval Black Forest. Since Kohlbrenner is far below in the social hierarchy, Peter and his family are only despised and humiliated by the other villagers. Only Lisbeth (Henriette Confurius), the daughter of the wealthy glassmaker Löbl (Sebastian Blomberg), treats him with kindness and respect. No wonder Peter falls head over heels in love with the beautiful girl, knowing that she will never be allowed to marry a man of his rank. That's why he has to get somehow to wealth and prestige. The only possibility seems to be a pact with the mysterious Dutchman-Michel (Moritz Bleibtreu). But the price for the wealth is high, because instead of his heart Peter now carries a stone in his chest. But can he win Lisbeth's love for himself, wealthy but emotionally cold?

"Das kalte Herz", the remake of the popular story by Wilhelm Hauff, is a very ambitious work. Director Johannes Naber has tried to stage a visually stunning fantasy fairy tale, which at the same time shows a certain authenticity. Dirt, suffering, hunger, cold - all this is implemented here in a comprehensible way. Unlike in the Shire, for example, you don't want to live here as a spectator. As praiseworthy as the efforts to integrate the fantastic aspect of the story into a realistic environment are, this also creates some problems. That's just not the way the movie's fun. The staging takes itself far too seriously, leaving no room for playful lightness. And that also has a negative effect on the entertainment value.

Another problem is that almost all figures look too "played". No question about it, Frederick Lau embodies the change from a good-natured Peter to an ice-cold businessman very well and Moritz Bleibtreu is also very convincing as a Dutch Michel. Nevertheless, you can never escape the feeling that the actors somehow seem disguised and artificial. Especially Sebastian Blomberg, who is very much appreciated by me, with his worldly moustache and his pipe seems too artificial to be able to fit into the scenery credibly. This also results from the attempt to implement everything as authentically as possible... A little more lightness would have been desirable here as well.

When in the end a "We must treat our environment more respectfully"-message is also thrown around the audience's ears, a twisting of the eyes can hardly be avoided. No question: "The cold heart" looks great, has some really nice pictures to offer, as you see them in the German cinema unfortunately much too rarely. Nevertheless, the staging with its high ambitions stands in the way of itself. Naber has created a film that can only be praised for its craftsmanship, but which is very difficult to assign to a target group. The narrative style is simply too bulky and too clever for that. A little more lightness to allow the viewer to immerse himself in this world would have done this work good in any case. And that's why there's only one thing left to do: Worth seeing!