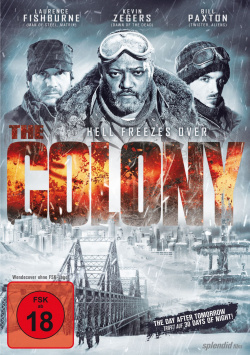 Contents: In a not too distant future a new ice age has destroyed a large part of mankind. The few survivors have rescued themselves below the earth's surface. Here they have created small colonies where they are offered food, medicines and protection from the deadly cold. But even the colonies offer no protection against diseases and self-destructive behaviour of their inhabitants. And so now only colonies 5 and 7 are inhabited. Briggs (Laurence Fishburne), the leader of Colony 7, tries everything to protect the people he feels responsible for. And so anyone who shows signs of disease must be quarantined immediately. If the disease cannot be contained with medication, the patients have to leave the colony or are shot. For Mason (Bill Paxton) the latter is the only real option, because he wants to prevent with all his might that life in his colony will soon no longer be possible. And so it is also Mason, who wants to convince Briggs not to respond to an emergency call as colony 5 in order not to risk further human lives. Nevertheless Briggs together with Sam (Kevin Zegers) and the young Graydon (Atticus Mitchell) sets off on a dangerous journey through icy cities and impassable landscapes to colony 5 - where they make a horrible discovery...

With "The Colony", director Jeff Renfroe has staged an apocalyptic end-time thriller that mixes set pieces from the John Carpenter classic "The Thing" with elements from "30 Days of Night" or Roland Emmerich's "The Day after Tomorrow" to create an exciting whole. Renfroe only succeeds to a very limited extent in refreshing history with his own impulses. But even though the whole thing has a high recognition value and only a very small surprise factor, "The Colony" is never really boring. Especially the opening sequence, in which the lives of the few survivors in Colony 7 are shown, is very captivatingly staged and makes the desperation and will to survive of the small community easy to understand.

When Briggs and Sam leave the colony and make their way through the world covered in ice and snow, the small budget Renfroe had to work with becomes quite apparent. The Special Effects simply can't play in the top league. Nevertheless: the apocalyptic ice world, which the team has designed here with relatively small means, is really something to be proud of and provides some more than decent show values. And when pure horror breaks out in the apparently abandoned colony 5, then the friends of the somewhat harder pace also get their money's worth.

Although this isn't really new, Renfroe's production is dense enough to still be able to generate good suspense. The convincing performers, above all a familiar confident Laurence Fishburne and an emotionally undercooled Bill Paxton, add to the entertainment value. Towards the end, however, the story runs out of steam and Renfroe relies too much on the bloody shock effects. At first they are very entertaining for horror fans, but at the end they can't really hide the script's weaknesses anymore.

However, even though "The Colony" may be far from being a perfect movie, the movie offers atmospheric and exciting entertainment. So if you like dark end-time horror with some convincing pictures and quite bloody effects, you should definitely visit Kolonie 7. Worth seeing!

Picture + sound: As only a data-reduced press sample was available for the test, no evaluation of the final picture and sound quality can be given here.

Extras: The bonus material could also not be viewed on the press disc. A look behind the scenes has been announced for the purchase variant.

Fazit: "The Colony" is an apocalyptic horror thriller, which primarily uses well-known genre elements, but which combines them in a very entertaining and exciting way to an entertaining whole. Despite a relatively small budget, the production shot in Canada is visually as well as theatrically convincing. Not a masterpiece of the end-time horror film, but for an exciting home cinema evening the film offers enough successful moments. Worth seeing