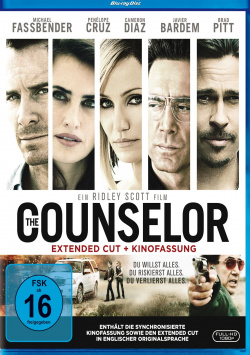 Film: The life of the lawyer, who is only called Counselor (Michael Fassbender) by everyone, is heading for a happy climax when he gets engaged to his attractive girlfriend Laura (Penélope Cruz). He wants to do everything he can to make Laura happy. But it costs money. Money the counselor doesn't have. Therefore he decides to take part in a business of the nightclub owner Reiner (Javier Bardem). The Counselor throws the warnings of Westray (Brad Pitt), the middleman who is supposed to mediate the not quite legal deal, into the wind, as well as his doubts about the influence Reiner's manipulative girlfriend Malkina (Cameron Diaz) exerts on him. Too much is his otherwise so sharp mind clouded by his love for Laura. Too stupid, because when the deal goes wrong, he completely loses his usual control over his life and puts not only himself but also Laura in great danger...

"The Counselor" unites so many talents in front of and behind the camera that you are almost willing to call the film a masterpiece unseen. Because when master director Ridley Scott, the genius ghost behind "Alien", "Blade Runner" or "Gladiator", has written a script by Cormac McCarthy ("No Country for Old Men", "The Road") and gets stars like Javier Bardem, Brad Pitt, Cameron Diaz, Michael Fassbender, Bruno Ganz or Penelope Cruz in front of the camera, then only something really great can come out of it. But if you watch the movie with this excessive expectation, you might experience a bitter disappointment.

Were there a lot of great moments, wonderful dialogues and great actors. Moreover, the movie looks really good - a matter of course for Ridley Scott. Nevertheless, the overall picture is rather confused and completely overloaded than cleverly constructed and convincing. Certainly, a movie can profit from this, if it doesn't tell its story in a completely straightforward way and if it challenges the viewer with a certain confusion. But when at the end you completely lose track of the individual storylines, can't understand the motivations of the characters and when the whole thing is protracted with unnecessarily long and provocative conversations about sex, then it's just hard to speak of a good movie despite the many well done aspects.

This gives the impression as if Scott had concentrated on working out individual scenes particularly strongly and as if he had completely lost sight of the cohesion between these scenes. For example, a long conversation between the counselor and Reiner, after which they will forever see sucking catfish with different eyes, has a certain entertainment value. In the overall context, however, it seems rather meaningless and only ensures that the already very dialog-heavy events are unnecessarily inflated. There are many aspects that in themselves are really successful and in some cases even great. The ice-cold, manipulative play of Cameron Diaz is just as much a part of it as the farewell to Brad Pitt's character Westray. So it's all the sadder that Ridley Scott didn't manage to create a thriller out of all the good ingredients, which is really as clever as "The Counselor" claims to be.

What's the use of great pictures, a thrilling cut, convincing actors and some good dialogue scenes, when the viewer lacks any access to the characters and at the end you just wonder what the whole thing is all about. However, it may be that there are some viewers who see the genius of this movie precisely in this. And even if that should actually be true, it's just hard to see in the confusion the great genius that the talents in front of and behind the camera promise. So if you're more interested in the visual aspect than the content, or if you like it a little more confusing, you might be really excited about Ridley Scott's latest work. But if you hope for a clearly comprehensible story, you won't be disappointed by the great visual language.

The Extended Cut: In addition to the cinema version, the Blu-ray also offers a nearly 20-minute longer version, which is only available in the English original with optional subtitles. It is true that this version cannot destroy all the criticisms made in the cinema version. But the film as a whole can clearly profit from the new and extended scenes. The whole thing seems a bit rounder and more sophisticated, which is why some scenes are less lengthy despite their longer running time. If you couldn't get anything out of the cinema version, you won't be able to make friends with the longer version either. But if you have already suspected a not quite mature ingenuity in the shorter version, you will get your money's worth in the extended cut.

Picture + sound: Technically, the Blu-ray is fully convincing. The visual realization of the film is great: the high image sharpness, the very powerful colors, the well balanced contrasts and black values and the effective image depth ensure that the strong visual language of the film is also shown to advantage in home cinema. The sound, which is available in German as a lively DTS 5.1 mix, also leaves a consistently positive overall impression with some very good surround moments. Very good.

Extras: On the first disc there are three viral videos about Laura, the Counselor as well as Malinka and Reiner (approx. 7:29 min. in total), the US trailer and teaser for the film, in addition to the cinema version. The actual bonus material is then on the extended cut disc. Director Ridley Scott has contributed a highly interesting and insightful commentary, which is presented in the form of a video commentary with several Making of Clips. This results in a total film running time of three hours and thirty-six minutes in this mode. The thirteen video clips can also be selected separately and in this form result in a detailed Making of (approx. 78:32 min.). Very good!

Fazit: "The Counselor", with its rather confused narrative structure and some too lengthy dialogue sequences, can only partially fulfil the high expectations that are fuelled by the great talents in front of and behind the camera. The Extended Cut, which is available exclusively on Blu-ray, looks a bit rounder and more sophisticated overall, but can't compensate for all the weaknesses of the cinema version. If you manage to get involved with the movie's very own narrative style, you won't only be able to enjoy the especially outstanding scenes, but also the overall construct. For such viewers the Blu-ray is also recommendable due to the better movie version and the good bonus material: