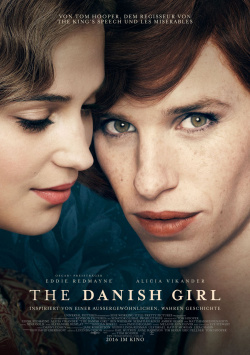 Copenhagen in the 1920s: Einar Wegener (Eddie Redmayne) and his wife Gerda (Alicia Vikander) live a happy life as an artist couple. Einar has achieved a certain popularity through his landscape painting, which Gerda has not yet achieved with her portraits. This changes when Gerda urgently has to deliver an unfinished portrait and asks Einar to step in as a model. At first, he resists posing in dress for his wife. But not only that the picture is met with enthusiasm by the buyer. Einar, too, is increasingly taking pleasure in transforming himself into "Lili". For Gerda this is first of all an amusing game. But slowly she realizes that there is more to Einar than that. He has found his true self in Lili and wants to live as a woman from now on. In more tolerant Paris, Gerda and Lili want to try this together. But even though Gerda's career is rising to undreamt-of heights here, the love between the two threatens to be broken by Einar's new life as Lili - until Lili makes a drastic decision…

With "The Danish Girl" director Tom Hooper dedicates himself again to a historical subject after "The King's Speech". Based on true events he tells the story of Lili Elbe and her difficult path as a transgender woman. Even if today, at least from a medical point of view, it is no longer a big problem to give a person who feels born in the wrong body the sex he or she desires, the tolerance towards transgender people still stands on quite shaky legs in all enlightenment. So it is not difficult to imagine the hostilities that a transgender woman like Lili Elbe faced almost a hundred years ago and the courage (and also the desperation) it took to decide on such a dangerous operation as a sex change.

Oscar-winner Eddie Redmayne plays the artist, who was born in the wrong body, with all her inner conflict, really great. Thanks to his very sensitive game, you can see at first how Einar blossoms when he is allowed to turn into Lili and how unhappy he is that this is only a role he has to take away for the outside world. Redmanye traces the path to Lili becoming not only a role, but his true identity in a very credible way. He doesn't do a travesty show here, but portrays a person who hopes to find inner peace as a woman, who is denied her as a man.

Hooper could have concentrated entirely on Lili in the film version of David Ebershoff's bestseller of the same name. It would have been easy to rely on the effect that Redmayne's game had. This would certainly make the movie interesting, but it wouldn't have become as worth seeing and emotional as it is in the end. This is due to the fact that Gerda is actually the focus of the story. She is an extremely exciting character: a woman, torn between self-sacrificing love and grief at losing her great love. She is tolerant and admires Lili's courage, wishes her all the happiness in the world, even if it means for her that she has to let her Einar go. Alicia Vikander plays this role absolutely brilliantly and thus prevents Eddie Redmayne from being played completely in the background. Certainly, Redmayne's portrayal attracts more attention. But in terms of intensity and persuasiveness Vikander is in no way inferior to him - on the contrary.

Straight through the fact that Hooper tells not only Lili's story, but also Gerda's, "The Danish Girl" becomes a very multi-layered and moving work. The very atmospheric equipment, the good supporting actors and the beautiful film music also contribute to a very positive overall impression. However, despite all the praise it has to be noted that there are some scenes that are a bit too worn, which results in shorter lengths. Moreover, the movie runs the risk here and there of becoming a bit overblown despite all its sensitivity. If you want to see a quiet character study, a very moving love story and an atmospherically equipped artist drama, you will get your money's worth, despite some small deductions in the B-score. And that's why the bottom line is very clear: Worth seeing!