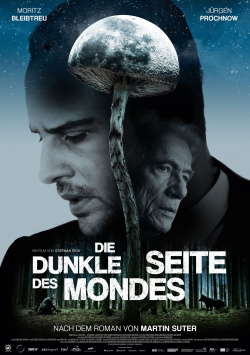 The Dark Side of the Moon

Frankfurt's business lawyer Urs Blank (Moritz Bleibtreu) is a real wolf in his field: he unflinchingly senses the weaknesses of his opponents and takes a bite at the decisive moment. This has brought him much success and prosperity and has not burdened his certain so far. But when one of his clients kills himself in front of his eyes after a hard negotiation, Urs slowly begins to doubt his previous life. When he gets to know Lucille (Nora von Waldstätten), who lives in a non-conformist way, he is quickly fascinated by her alternative lifestyle. And so he does not hesitate for long when she seduces him to a trip with hallucinogenic fungi. But this moment in which Urs allows himself to give up control has fatal consequences and reveals his dark side. A side he can't control. Suddenly Urs is a time bomb driven by his basic instincts, which could ruin not only his career but also his life forever…

Based on the novel of the same name by Martin Suter, Stephan Rick has staged "The Dark Side of the Moon", a dark thriller drama with an outstanding Moritz Bleibtreu and an intense visual language. The film concentrates entirely on the figure of Urs Blank and thus detaches itself from the book model, which has also given space to the narrative perspective of other figures. For the adaptation, however, it was a good decision to reduce the story to the essentials. This also works because Urs is simply an interesting character. Even before he sets off on his psycho-trip, he is not exactly a man who treats his fellow men squeamishly. His actions are always at the limit of what is morally justifiable or even exceed it. The only difference is that at the beginning he acts consciously and strategically - before he loses control over himself.

If his dark side gains the upper hand, the ice-cold lawyer commits acts that should actually make the viewer turn away from him in disgust. But due to the well elaborated script and the intense play of Moritz Bleibtreu you are simply fascinated by the abysses that open up here. And somehow one also hopes that Urs will find his way back to the right path after all. Also the atmospheric locations in Cologne and Luxembourg, which have to serve as double for Frankfurt and the Taunus, support the dark and tense atmosphere, which makes the first hour extremely worth seeing.

At the end the whole thing changes from a disturbing psycho-trip into a somewhat conventional economic thriller. Especially the finale is a bit too constructed. But also here the dense staging and the good acting of the actors can make up a lot of ground. Even though "The Dark Side of the Moon" can't quite keep what the beginning promises in the end, Stephan Rick has nevertheless succeeded in creating an exciting and at times pleasantly multi-layered piece of German thriller cinema, which, unlike many other German films, also deserves cinema exploitation because of its visual language. At the end there is only a clear one for it with small compromises: Worth seeing!

Kino Trailer zum Film "The Dark Side of the Moon (Deutschland/Luxembourg 2015)"
Loading the player ...