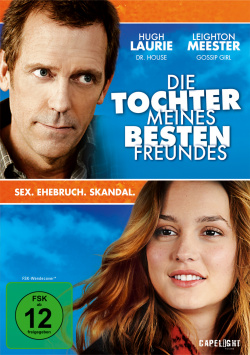 The daughter of my best friend - DVD

Film: It's a total idyll: The families Ostorff and Walling are not only neighbours in West Orange, a picturesque suburb of New Jersey. They're also best friends. David Walling (Hugh Laurie) and Terry Ostroff (Oliver Platt) go jogging together every morning and like to spend time together. And with beautiful regularity the families meet to the common meal. When Nina (Leighton Meester), the daughter of Terry and Cathy (Allison Jenney) and betrayed by her fiancé, returns to her family for Thanksgiving after an absence of five years, neighborhood happiness seems perfect. Because Toby (Adam Brody), the son of David and Paige (Catherine Keener) also arrived over the holidays - and the two of them would make such a pretty couple. Too stupid that not between Nina and Toby, but between Nina and David the sparks sparkle - so powerful that a liaison begins between the two, which could destroy not only a marriage, but also a deep friendship forever...

"The daughter of my best friend" deals with a topic, which would have had what it takes for a concrete drama. But the British director Julian Farino, who makes his US feature film debut here, manages to skilfully extract the comic aspects of the story. With a lot of humor, some drama and romance Farino establishes a highly entertaining balance, which actually only has one real weakness: the movie is just far too good. Although the script always has some really funny and also very nice ideas to offer, they lack the bite to lift the story beyond leisurely TV entertainment.

The good actors give their best to play against this flaw. Hugh Laurie is very reserved compared to his Doctor House, but besides Oliver Platt, the very charming "Gossip Girl" Leighton Meester and a wonderful Allison Janney, Laurie's performance fits perfectly into the action. It's fun to watch this ensemble, even if the feeling always arises that the script doesn't really do justice to their achievements.

However, there are two aspects of the production that can surprise you a little. First, there is the fact that the relationship between young Nina and much older David never seems inappropriate, slippery or untrustworthy. You take it from them that they really fell in love with each other and even if this is at the expense of David's marriage and therefore can't be considered morally positive, you somehow hope that there is a future for the couple.

The second aspect is the end. The story heads towards Nina's decision towards the end, which surely would have been chosen by many other scriptwriters and which also seems to become reality for a long time. But the fact that things will turn out quite differently is something Farino and his co-author Ian Helfer deserve credit for. The daughter of my best friend" is neither an absolutely realistic marriage drama, nor a really biting suburban satire, but only something half in between. But since this can still be entertaining because of the good actors, some very amusing scenes and the satisfying ending, friends of American family comedies, which sometimes hit a softer note, then again culminate in comedic chaos, shouldn't regret the purchase of this DVD. Worth seeing!

Picture + sound: Like the movie itself, picture and sound quality on the DVD are good average. The image is very clean and the overall sharpness is at a good level. Here and there, however, there are minor weaknesses in the detail display and slight image noise in darker scenes. The colour scheme, on the other hand, is convincing all along the line. As is the rule with this genre, the tone is primarily determined by the dialogues and the music. Real surround moments are of course scarce. Altogether there is still one for it: Good!

Extras: Not much is offered here. Besides two short promo features about the making of the movie (ca. 6 + 3 min.) there are two quite entertaining interviews with Leighton Meester (ca. 5 min.), as well as with Hugh Laurie and Catherine Keener (ca. 6 min.). And of course, the trailer must not be missing.

Fazit: "The daughter of my best friend" is a nice and above all well played mixture of comedy and drama, which, however, lacks the necessary bite to leave a lasting impression. For entertaining entertainment in between, however, it is always enough. Technically, the DVD is well done, the bonus material is nice, but also a bit superficial. If you like American family comedy with a little bit of drama, you can take a look here despite some weaknesses. Recommended