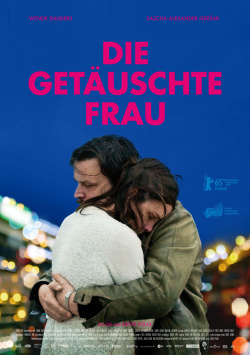 For ten years Nina (Wende Snijders) was happy with Boris. She loved him and was sure that she would spend the rest of her life with this man. But now Boris is dead. A car accident ripped him out of Nina's life. But her grief is intensified by the realization that she has been lied to all the time by her great love. Because it turns out Boris lived a double life the whole time. He is married and has children. The already traumatized Nina falls after this discovery into a deep hole. She can under no circumstances continue her everyday life in this way. And so Nina breaks out of her life and embarks on a fateful journey through Europe. At the side of the truck driver Matthias (Sascha Alexander Gersak) she even seems to be able to escape her worries for a short time. But the burden of her grief continues to weigh mercilessly on her soul...

"The Deceived Woman" is a very difficult film. On the one hand, director Sacha Polak must be credited with being able to build up a certain fascination with the two-part, non-linear narrative structure and the dreary visual language, which is difficult to escape. Nor can it be denied that main actress Wende Snijders delivers a very intense performance, which makes Nina's pain palpable in almost every second. On the other hand, the film is very bulky overall. It takes a long time for real dialogues to come about. Most of the time the viewer is confronted with Nina's suffering facial expression. And that's not only extremely depressing in the long run, but also extremely exhausting.

In addition, especially in the second part, which is to be seen first, no story is told in the classical sense. If you haven't informed yourself in advance about what the film is about, you will ask yourself for almost an hour what the whole thing is all about. This is only experienced - albeit only in fragments - in the first part of the plot shown in the second half, the end of which in turn leaves a big question mark about what you saw first.

Sicherlich, Kino does not always have to tell feel-good stories. Cinema can - and should - sometimes be challenging and emotionally stirring. That's exactly what "The Deceived Woman" wants to achieve. But Sacha Polak's high ambitions make it almost impossible for the audience to gain access to the main character and her fate. And this inevitably leads to the fact that the movie seems to be really cool and could leave the viewer not only helpless but also bored. Certainly, there will also be those arthouse lovers who see the real strength of the film in these points of criticism and regard it as a great art. But since the drama will probably only be accessible to a very small audience in this way, there is only one thing at this point: worth seeing with reservations!