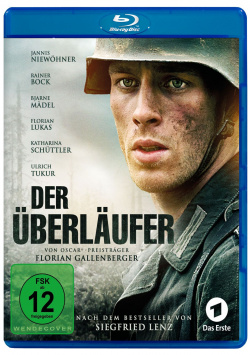 Film: Summer 1944: The young Wehrmacht soldier Walter Proska (Jannis Niewöhner) meets the young Polish partisan Wanda (Malgorzata Mikolajczak) on the train on his way back to the Eastern Front. Wanda has placed a bomb in the train. The soldier is able to remove the explosive charge and help the woman to escape. But a short time later the train explodes when it runs over a mine laid by partisans. Proska survives and ends up with a small unit of German soldiers in the swamps of Rokitno. The command of the small unit is led by non-commissioned officer Willi Stehauf (Rainer Bock), who drives the men in the Polish woods crazy with his sadistic manner. Through a chance reunion with Wanda and the friendship with his comrade furrier (Sebastian Urzendowsky) Proska begins to question more and more the correctness of his mission. When he is taken prisoner of war by the Russians, he has to finally break away from his oath of allegiance in order to survive the war.

"The Defector" was written by Siegfried Lenz as early as 1951. However, the content of the book was too politically explosive for his publisher, which is why it was never published during his lifetime. It was not until 2016, months after the author's death, that the novel hit the market and immediately became a celebrated bestseller. Oscar-winner Florian Gallenberger took on the difficult task of filming the work as a major event two-parter for ARD. The result is perhaps not quite as profound as the original novel. Nevertheless, Gallenberger has succeeded in creating a gripping war drama about moral conscience, about guilt and atonement and about humanity in times of cruel wars.

The moving love story woven into the plot does not seem forced, but rather an important motivator for Proka's actions. Thus, there are always moments that are emotionally touching without ever seeming kitschy. However, the two-parter can also profit from the great cast. Rainer Bock as a sadistic non-commissioned officer has to be pointed out here. Bock, who recently had a memorable appearance in the great "Breaking Bad" spin-off "Better call Saul", gives this character a frightening intensity. But also the main actor Jannis Niewöhner leaves an all-round positive impression.

With a running time of almost three hours there are pleasingly few lengths and even a few small weaknesses, for example in some visible green screen effects, can be easily overlooked due to the really first-class staging. "The Defector" is gripping television entertainment with extremely strong actors, haunting pictures and some really thrilling moments. Clearly: Absolutely worth seeing! &p></x>N</x>

Picture + Sound:&/strong> The picture of the Blu-ray lets the viewers dive well into the story by a very authentic looking colour scheme. Due to the good picture sharpness, even small details of the harmonious equipment are shown to advantage. The sound could have tolerated a bit more spatiality in some moments, but the dialogues are pleasantly powerfully mixed and music, as well as the ambient noises, are well adjusted to it. Good!

Fazit: "Der Überläufer" is a very strong film adaptation of the posthumously published novel by Siegfried Lenz. Director Florian Gallenberger manages very well to let the audience dive into the story without the usual clichés ever getting the upper hand. Interestingly drawn characters and a stirring story determine the events here, which are supported by a strong ensemble. The Blu-ray presents the two-parter in good picture and sound quality and also has some extras worth seeing on board. For this there is a clear indication: Absolutely recommendable!