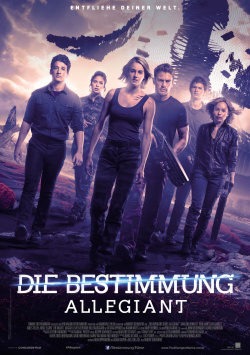 Jeanine is dead and Evelyn (Naomi Watts) has taken her place. Actually, everything should be better in Chicago by now. But the opposite is the case: there are executions, hatred and oppression. Tris (Shailene Woodley) and Four (Theo James) know that they can only make a difference if they flee the city and find out what lies behind the walls. Together with Caleb (Ansel Elgort), Christina (Zoë Kravitz) and Peter (Miles Teller) they manage a spectacular escape. But when they find what they were looking for, it soon becomes clear that there is still a much greater danger lurking here that could cost the lives of everyone in Chicago - everyone except Tris…

"The Destiny - Allegiant" is the third of the four-film adaptation of Veronica Roth's popular novel trilogy. As in part 2 Robert Schwentke ("Flightplan", "R.E.D. 2") was behind the camera again. And also otherwise the team has remained the same over long distances. So it was to be hoped that the third movie would be as qualitatively satisfying as its two predecessors. Especially since with Jeff Daniels another first-class actor could be won for an important supporting role. Unfortunately, however, hopes are not being fulfilled. "The Destiny Allegiant is a tremendous disappointment in many respects. As with the filming of the last volume of the "Tribute of Panem" trilogy, the division of the final volume into two doesn't really prove to be a wise decision. This results in too many unnecessary lengths, which even rub off on the scenes that are supposed to be full of action.

The dialogues, which weren't necessarily award-worthy in the first two films, reveal even more weaknesses, which also underlines the enormous predictability of the dramaturgy. It's never a good sign if you as a viewer can join in the dialogues or know exactly what follows typical cliché statements. That wouldn't be too bad, if the rest of the movie could be convincing. But here, too, there are only few positive things to report. The actors sometimes seem a bit bored and also the visual realization - one of the big strengths of the first movie - is disappointing. Especially with some special effects it seems as if the makers didn't have enough time to really finish them. Too often you see clearly that the actors have acted in front of a green screen. And when Tris, Four and the others are flown through the radioactively contaminated country in safe bubbles, it doesn't look impressive, but rather unintentionally funny.

It is certainly not easy to create two big effects blockbusters within two years. The fact that this can lead to qualitative restrictions may be acceptable in some respects. But when a filmmaker was so obviously overburdened with his task, as it becomes clear here, then there is just not much more to be done. If the makers had confined themselves to staging "The Destiny - Allegiant" as the final movie of the series instead of unnecessarily inflating the plot and taking a little more time to work out the special effects, the result could have been a really good finale. But now all hope lies in the fourth film, which will finish telling the story in the summer of 2017. Whether anyone would like to see that after this really weak third part, that is certainly written in the stars. Only worth seeing for fans with significant cutbacks!