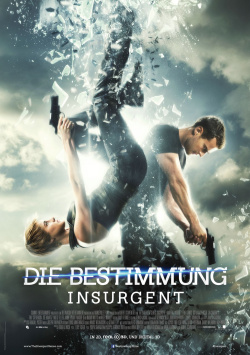 After the attack on the Ken and their leader Jeanine (Kate Winslet), Tris (Shailene Woodley), Four (Theo James), Peter (Miles Teller) and Caleb (Ansel Elgort) are on the run from the Ferox, who are hunting them under the direction of Eric (Jay Courtney). Although they find shelter with the Amite, their safety here is not guaranteed for long. Jeanine's henchmen quickly locate them here and only with a lot of luck can the four escape with a train in the direction of the city. Here they meet a seemingly well organized group of factionless people led by Fours deadly mother Evelyn (Naomi Watts). She asks her son and Tris to go to the Candor and get the Ferox who are there to join her in the fight against Jeanine. But in the meantime she has found an object with whose help she could smash any rebellion and strengthen her power. But to decipher the secret of this object, she needs the help of a particularly powerful divergent - Tris!

"The Destiny - Insurgent", which follows the events of the first part almost seamlessly. Although there are some cleverly placed flashbacks and allusions to past events, and the system of factions is also explained once again, viewers who have not seen the first film or are not familiar with the successful book by Veronica Roth could quickly lose the overview. Director Robert Schwentke, who has taken over the baton from Neil Burger, pushes the story relatively fast and rarely stays with the backgrounds of the story and its characters. At some points you could assume that the movie has a certain superficiality. But this impression is only created when you see it as a completely independent story - and that's not the case with this second part of the series, which is designed for a total of four films.

As a continuation, "Die Bestimmung - Insurgent" is absolutely successful. The story is consistently continued and not only varies, as is often accused of the second book and film of the "Panem" series, the events from the first part. There are some small surprises and very good moments of tension, but also a lot of pathos and inconsistencies. Why the perfectly trained Ferox, for example, don't manage to hit refugees with their handguns over open terrain is as much a mystery as the fact that in the dystopian world there is apparently unlimited access to decorative make-up or the fact that Tris can miss the perfect short hairstyle in the dark.

Except for those points of criticism where the target group will be only marginally disturbed anyway, the film is really good as what it wants to be. The actors are absolutely convincing compared to the often rather simple dialogues they have to give. And the visual realization in many scenes is extremely atmospheric and trick technically beyond any doubt. It is precisely the mixture of post-apocalyptic destruction and futuristic technique that makes these films particularly appealing.

The most interesting character in the story is Peter, embodied by Miles Teller, in the second part as well, for whom it is not so easy to tell whether he is one of the good guys or the bad guys, while this classification can be clearly seen in Tris, Four or Jeanine. Other characters that are similarly ambiguous or multi-layered would certainly have done the story good and given it an additional depth that would have absolutely deserved the factions' really interesting concept. But even if the film can't come up with it, "Die Bestimmung - Insurgent" has become a really exciting, stirring and visually fascinating adventure, especially for fans of the books (and the first film), which already makes you want to see the first part of the finale, which will be shown in the cinemas next spring. Worth seeing