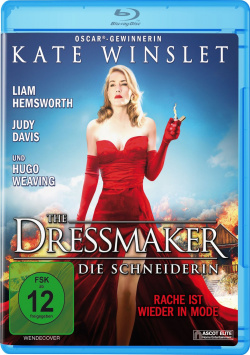 Film: Many years ago Tilly (Kate Winslet) was expelled from her small hometown in nowhere in Australia. As a child, she is said to have murdered a classmate. Although she has made a career abroad in the fashion industry, the dark veil of her past has never let go of her. And so she returns to enlighten the boy's death, hoping that her reputation and certain things will also be washed away. But neither the inhabitants of the town nor her mother (Judy Davis) welcome Tilly with open arms. Only when the women of the city become addicted to their fashionable creations and bring a little colour and flair to the grey desert town does the tide seem to turn. But the past never sleeps - and revenge certainly doesn't…

"The Dressmaker" is a very unusual film. The whole thing begins like a very weird comedy, which sometimes has a deep black humor. But then the whole thing turns into a dark drama with light detective elements and a biting revenge story. The tone seems somewhat unbalanced: If you can still laugh heartily in one moment, the mood in the next scene goes deep into the cellar. Actually, that shouldn't work. But director Jocelyn Moorhouse somehow managed to give the viewer a surprisingly harmonious overall picture at the end, which is just fun.

This is partly due to the wonderfully quirky basic atmosphere, which moves completely away from the mainstream. The already good actors can then run to top form in it. Kate Winslet is a rachelüsterne beauty with a good portion of big city arrogance simply great and is played only by Hugo Weaving as a policeman with a penchant for beautiful women's clothes on the wall. And Judy Davis is also great as a slightly crazy mother of revenge angel Tilly. Paired with some wonderfully bizarre scenes and well implemented character moments the ensemble offers absolutely worth seeing actor cinema in front of a fascinating scenery of the Australian no man's land.

While the film was a hit at the cinema in Australia, here in Germany it is denied access to the cinemas, which is a pity in view of the visual language. However, one must also admit that "The Dressmaker", despite its qualities and its high entertainment value, is not a film for a mass audience. The humor is just too special for that and the discrepancy between the amusing and the dark moments is too big. You have to be able to get involved with this as a spectator. But if this succeeds, nothing stands in the way of a more unusual home cinema evening. And since Kate Winslet can convince in almost every one of her roles, there's one clear thing for her great appearance as a scandalous sex bomb, which not only confuses a sports event in the small town, alone: Absolutely worth seeing!

image + sound: The Blu-Ray's image is absolutely clean and has a very good overall sharpness, which also brings out smaller details well in dark scenes. The colour scheme has a very atmospheric effect, which comes into its own especially in the outdoor shots. The DTS-HD 5.1 Mix provides a lot of movement on the surround channels in some scenes, but primarily transports the dialogues out of the speakers in a way that is easy to understand. Good.

Extras: As a bonus there are three promo featurettes about the story (approx. 3:42 min.) in addition to the trailer and further program tips of the provider.), about the costumes (ca. 3:36 min.) and Kate Winslet (ca. 2:06 min.), as well as eleven sometimes quite interesting interviews with actors, director, producers and costume designers (ca. 50 min.). Almost 13 minutes of uncommented B-Roll recordings from the shooting round off the bonus program.

Fazit: "The Dressmaker" is a very entertaining mixture of deep black comedy with bizarre wit and dark drama with light crime elements. The tone of this very special revenge story sometimes changes drastically, which doesn't always fit together very well. But the overall picture is right and it's a lot of fun because of Kate Winslet and a wonderful Hugo Weaving. The Blu-ray presents the film in atmospheric picture and sound quality. As a bonus there are some informative interviews in addition to the usual advertising material. Altogether there is a very clear one for this Australian hit: Recommended!