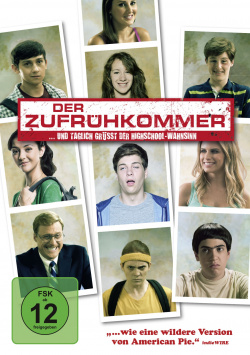 Film: The day begins well: just today, when Rob (John Karna) has an important job interview for Georgetown University, he wakes up from an extremely wet dream, which of course is immediately discovered by his mother who is unnerved by the hormone boosts of her teen son. At school the chaos continues: first he gets his pants torn away by a few hooligans, then he has to turn down Angela (Carlson Young), the woman of his dreams, for the evening, because he already has a date with his best friend Gabrielle (Katie Findlay). And then the envoy of the university (Alan Tudyk) gets a nervous breakdown during the conversation. Completely frustrated Rob decides to at least get a nice side to the day. So he cancels Gabrielle and visits Angela, who quickly shows him that she is not after learning, but rather after fiddling. And after just a few seconds this makes sure that a warm surge pours into Rob's trousers again - and exactly at this moment he wakes up again in the same morning and has to experience the whole day again. And after each ejaculation, the clock is turned back to the beginning. How does Rob deserve that and how can he break through this terrible time slumber?

"The early summer" could alternatively be called "And daily greets the morning bar". The rough-puberant time loop is obviously based on Harold Ramis' wonderful "Marmot" film, seasoned with a strong portion of "American Pie". And also other films are quoted here. For example, Rob's wet dream introducing the story is a clear reminiscence of a very special character from "Total Recall". Director Dan Beers tries to spice up all these well-known set pieces with some of his own ideas. The end result should be a fast-paced, cheeky fun, which should entertain especially young viewers from 16 years well.

This works however only conditionally. On the positive side there are some really funny jokes and also a sympathetic leading actor. Also Katie Findlay as best friend Gabrielle is very sympathetic and for the audience it's clear that she fits Rob much better than Angela, who might be sexy, but is also very superficial and manipulative. In addition, Alan Tudyk, an emissary of Georgetown University, makes some good laughs with his nervous breakdowns. On the negative side, however, there are a lot of notes from the lower drawer, which primarily revolve around bodily fluids of all kinds. That may still be quite funny for some viewers. But there are a few other jokes that are simply tasteless (like the one about an Israeli exchange student) that nobody should really be able to laugh about.

If Rob wants to escape an accident he's had twice, which has unexpected consequences the third time around, it turns out that the time loop topic really has potential for really good jokes. Even if he takes some things out for the school hooligans or his teacher equipped with a luxuriant bust, which he would otherwise never have dared to do, in the certainty of undoing the events with the next outpouring, the "Zufrühkommer" shows itself from its extremely amusing side. The comedy could have been really good without the tiringly overworked penis jokes and faecal gags. So she is still a nice fun with some very good jokes, but also with a lot of lukewarm or even annoying missteps. Not an intellectual masterpiece, but still worth seeing as a wacky teeny clown!

Picture + sound: As the final product was not available for testing, the final picture and sound quality cannot be judged here.

Extras: Bonus material is not announced.

Fazit: The humor of "The Early Comer" may be infantile and extremely rough. The story may be a pubertal copy of "And daily greets the marmot". And the comedy may not offer the highest level of acting either. And yet the whole thing works quite well for the target group. Because besides some very tired jokes, which are all below the belt, there are also some really funny ideas and very good laughs, which guarantee good entertainment for the young audience, for which this film is made. Not an intellectual masterpiece, but as a wacky teeny clown absolutely recommendable!