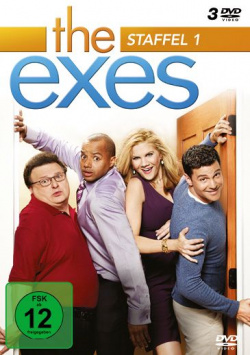 Film: Divorce lawyer Holly (Kristen Johnston) persuades her former clients, the notorious womanhero Phil (Donald Faison) and Couch-Potatoe Haskell (Wayne Knight), to include her new client Stuart (David Alan Basche) in their shared flat. The two quickly regret their agreement, as Stuart is a pedant of a particularly terrible kind. Especially Phil wants to banish the all too pushy Stuart from his bachelor paradise very quickly. But just as the new roommate is packing his bags again, he of all people could help Phil get a real dream woman into bed. And so he gives him another chance - the beginning of a very special male friendship with many ups and downs. And also Holly ensures with her regular visits to the men's flat that no day passes without (emotional) chaos...

That Mark Reisman, creator of "The Exes", is a real sitcom veteran, who has already worked on series classics like "Frasier" or "Die Überflieger", is clearly noticeable in the series. The stories about the turbulent single-sharing community are classic sitcom fare that follow a very conventional pattern and don't offer any big surprises. Although the scripts skillfully balance on the borderline of "political correctness" every now and then, they never really take any risks in the end. So "The Exes" could almost be described as a little old-fashioned, because it serves clichés that were already seen in the 70s as sitcoms like "Männerwirtschaft".

What may not sound very positive now, offers really good entertainment. Surely, some gags seem to have come out of the deepest shallows of the sitcom moth box and therefore don't produce more than a tired smile. On the other hand, there are many really funny moments and good laughs, which compensate for some of the weaker moments. Moreover, the series is well cast with its very different characters. Kristen Johnston and Wayne Knight, who have already played together wonderfully in "Hinterm Mond gleich links" (Hinterm Mond, Hinterm Mond, Hinterm Mond, Hinterm Mond, left and right), are once again skillfully playing the comedic balls. Donald Faison radiates a charm similar to the one that made him a great popular figure in "Scrubs". And David Alan Basche finally fits perfectly into the Chaos-WG as a very pedantic Stuart. Kelly Stables should not be forgotten. The actress, who has already left a lasting impression in ten episodes of "Two and a half men" as Alan's receptionist Melissa, makes some really funny appearances in her rather small role as Holly's assistant Eden.

The first season of "The Exes" offers ten funny episodes that provide friends of traditional sitcom food with the best entertainment and make them want more. At the latest after the funny Jockey episode the addiction factor strikes, so that it's almost impossible not to watch the ten episodes at once. Fortunately, three more seasons have already been shot, which hopefully will find their way to Germany very quickly. Until then, despite some weaknesses, this first season has a very clear rule: Worth seeing!

Picture + sound: The technical implementation of the DVD is on a good TV level. The picture is clean, has powerful colours and reveals a good overall sharpness. Smaller details sometimes look a bit washed-out, but otherwise they come into their own. The sound is available as a very front-heavy stereo mix in which the dialogues determine what happens. For a series in the rather classic sitcom style this is completely sufficient, which is why there is a clear "good" in the end.

Extras: Bonus material the DVD unfortunately does not have to offer.

Fazit: "The Exes" is a classic ensemble sitcom where not every gag sits, but which has enough good laughs to entertain comedy fans. The actors harmonize well with each other and play out their respective strengths well, making the characters accessible and interesting despite a very stereotypical character drawing. This series may not have what it takes to become a classic, but this first season offers charming and largely funny sitcom entertainment. And for that there is, despite missing bonus material, a clear one: Recommendable!