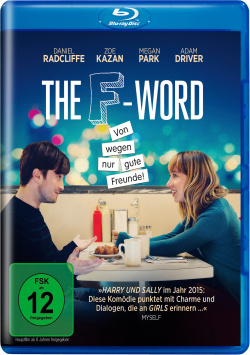 Film: Wallace (Daniel Radcliffe) is a true romantic. So it's no wonder that the separation from his girlfriend broke his heart to such an extent that he dropped out of medical school and also completely cut himself off from his social environment. Much rather he spends the nights sadly watching the starry sky over Toronto. But when he is persuaded to go to a party, he quickly realizes that it's worth it to go out among people. Because he gets to know the charming animator Chantry (Zoe Kazan), who lies exactly on his wavelength. Between the two the sparks are spraying and Wallace is immediately on fire. But unfortunately Chantry is already spoken for and just wants to be friends with Wallace. At least at the beginning this seems to be a good alternative. But unfortunately Wallace doesn't manage to suppress his true feelings for long - and the emotional chaos is pre-programmed...

The story Michael Dowse tells in "The F-Word" is now really anything but new. This modern "Harry and Sally" variant doesn't offer any surprises and its outcome is predictable from the very first minute for any viewer who has seen a romantic comedy in his life before. And yet, especially in the first hour, the movie seems pleasantly fresh and extremely charming. This already begins with the visual language, which sometimes uses lovable animations and in other moments seems like a wonderful declaration of love to the Canadian metropolis Toronto. In many scenes the city seems like a third main actor, who is just as important for the story as Wallace and Chantry.

Which would be us in the cast. It was certainly a venture to fill the role of Wallace with Daniel Radcliffe, who despite some roles against his image is still very closely connected with the character of Harry Potter. Some viewers might find it difficult to see him as a romantic hero. Dowse might have been aware that there will be at least one joker in every show who won't be able to resist a magic wand joke. But taking the risk pays off in the end. Radcliffe's portrayal of the hopeless romantic is not only extremely sympathetic, but also extremely funny at the right moments. Thus, in the best slapstick manner, he causes what is probably the funniest window fall in recent cinema history and also does really well in his humorous dialogue duels with Zoe Kazan.

Anyway, the chemistry between him and Kazan is perfect. From the very first moment, the viewer is convinced that they have something very special in common. And, of course, you want them to get together. However, the path to this goal is becoming very conventional in the last third at the latest. The dialogues, which are still really lively and clever at the beginning, increasingly lose themselves in trivialities. And also the dramaturgy itself winds rather ponderously to the inevitable happy end. The likeable actors, who also include the always reliable Adam Driver ("Girls", "Inside Llewyn Davis") and Mackenzie Davis ("Für immer Single"), make sure that the movie is still very entertaining even in the tougher moments. However, "The F-Word" can't quite do justice to the promising beginning at the end.

Despite the rather weak and predictable ending Michael Dowse has staged a very charming, funny and heart-warming romantic comedy, that lives on some very atmospheric pictures and the good actors. It certainly won't be a timeless cult movie like the big role model "Harry and Sally", but it's enough for a fun and relaxed home cinema evening. Worth seeing!

Picture + sound: There is nothing wrong with the technical implementation. The sometimes somewhat artificial, very warm colour scheme, which gives the film its very special atmosphere, as well as the good sharpness of detail ensure that the visual implementation leaves an all-round positive impression. For a small comedy like this not uncommon the sound is rather reserved. Big surround moments shouldn't be expected. However, the dialogues and the soundtrack are well coordinated, which is why there is a contented "good" here as well.

Extras: The Blu-ray doesn't have any bonus material except for the trailer.

Fazit: "The F-Word" doesn't tell a new story. And even the final can only be convincing to a limited extent. Nevertheless, Michael Dowse has staged a very charming, witty and heart-warming romantic comedy, which lives from some very atmospheric pictures and their lovable actors. The Blu-ray presents the events in very appealing picture and sound quality. Only the missing bonus material clouds the otherwise very good overall impression a little. But only for the nice movie there is a very clear one: Recommendable!