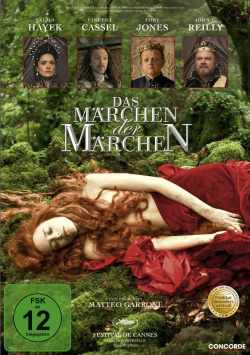 Film: Once upon a time… was a land full of magic and mystical beings. Here three kingdoms coexist in peaceful harmony. The Queen of Longtrellis (Salma Hayek) desires nothing more than a child. But unfortunately the king (John C. Reilly) has not been able to give her a present yet, which is why he uses unusual means: the heart of a sea monster is supposed to bring about an immediate pregnancy. But of course such a spell demands its price. In neighbouring Strongcliff, the king (Vincent Cassel) indulges in his fondness for beautiful women, but is a little bored because he is sure that he has had every woman from his kingdom in his bed by now. But then he falls head over heels in love with a mysterious woman whose face he has not yet seen. But her voice alone is enough to drive him crazy. He doesn't suspect that the beloved is the ugly old woman Dora (Hayley Carmichael), who lives in complete seclusion with her sister Imma (Shirley Henderson). But then a spell turns her into a beautiful young woman (Stacy Martin) - with unexpected consequences. And also in Highhill the single king (Toby Jones) has to fight with very special problems. After the death of his beloved giant flea, he calls for a competition: anyone who can guess which animal the flea was can marry his daughter Violet (bebe Cave). It's just too bad that it's a wild ogre that wins the competition…

For his latest film, celebrated filmmaker Matteo Garrone ("Gomorrah") three of a total of 50 fairy tales from the book "Il Racconto die Racconti", in German "Das Märchen der Märchen", interwoven by Giambattista Basile (1570 - 1632) to a bizarre-grotesque picture rush. Although there are fairies, mythical creatures and a beautiful queen, this film is truly not for children. Garrone is not only stingy with beautiful and imaginative pictures, but also with cruelty and eroticism, with gloomy despair and deadly love. No wonder, since these are all ingredients of the original, which already inspired the Brothers Grimm to some of their fairy tales. With great costumes, a great set and atmospheric locations, "Das Märchen der Märchen" is really a visual feast for the senses.

This is only true to a limited extent for the rest of the production, though. In many scenes, Garrone relies on a luxuriant slowness, which at times makes the narrative flow seem tenacious. At the same time, some plot elements are only hinted at, which is why some viewers might ask themselves from time to time what the whole thing is all about. Of course the stories are fairy tales with a lot of symbolism and room for interpretation. Not everything has to be explained down to the last detail. But since some of them might simply lose interest in thinking about the meaning of the stories because of some enormous lengths, the dramaturgy can seem a bit thin.

The unwieldy staging clearly dims the entertainment value of the fairy tale film, which is so successful in other aspects. What should only be a pleasure is often just exhausting, which even the great pictures can't completely catch at some point. Surely, it can be credited to Garrone that he staged such a film beyond the mainstream and thus created something really own and special. And there will certainly be viewers who will appreciate exactly that about this work. But it would certainly have been feasible to combine artistic ambition and creative independence with accessibility for an even wider audience. Thus, "Das Märchen der Märchen" has become an artistically valuable, yet contentwise a bit too elitist and thus undercooled film, which from a visual point of view deserves to be able to appeal to more viewers. Therefore there is only a "worth seeing" at the end of the day with small compromises!

picture + sound: The picture of the DVD is absolutely clean and presents the events immersed in warm, powerful colors. This underlines the very special atmosphere and visual language of the film very well. The overall sharpness is on a very good level, whereby even smaller details are usually shown to advantage. The sound is available in a pleasantly lively Dolby Digital 5.1 mix, which allows the voices to sound well intelligible to the soundtrack and the various smaller sound effects tuned from the speakers. Good!

Extras: Even if the movie has its weaknesses, at least the bonus material can convince all along the line. At the heart of the extras is a really worth seeing Making of (ca. 54:02 min.), which deals pleasantly promo-free with the shooting of special scenes and other aspects of the production. Besides there are four interviews with Vincent Cassel, Toby Jones, John C. Reilly and Stacy Martin (together about 11:38 min.), a short look behind the scenes (about 3 min.), as well as the trailer for the movie. Gut!

Fazit: "The fairy tale of fairy tales" is a fantasy fairy tale beyond the mainstream. Matteo Garrone has created something very special here, both positive and negative. Besides the many positive aspects, his movie also has to struggle with a lot of bulky, lengthy scenes, which often push down the entertainment value considerably. Nevertheless, the movie is fascinating enough in its own way to be able to catch most of that. The DVD presents this fairy tale for adults in good picture and sound quality and offers a very good making of in the extras. But there is a clear one: Recommended!