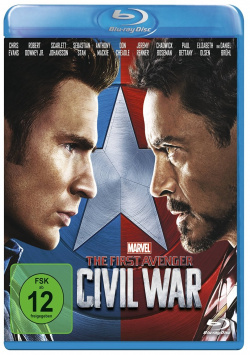 Film: After Batman and Superman from the DC-Universe have just beaten each other to death, Captain America and Iron Man from the Marvel-Universe are doing the same now. "The First Avenger: Civil War" follows directly after the events of "Avengers: Age of Ultron". After the destruction of Sokovia, the voices become louder that see the Avengers not as heroes, but as a danger to humanity. When a small Avengers team led by Captain Steve Rogers (Chris Evans) causes another international incident, the voices are loud, demanding that the Avengers be controlled by an independent body. While Tony Stark (Robert Downey Jr.) is about to sign a treaty initiated by more than 100 countries, Steve refuses to give up what he sees as the necessary freedoms for the Avengers. Serious tensions arise within the team, which threaten to escalate when Steve's old friend Bucky (Sebastian Stan), alias Winter Soldier, is apparently responsible for an attack when the contract is signed. When Captain America and other Avengers take Bucky's side, the end of the Avengers seems to have come…

With "The First Avenger: Civil War" the third phase of Marvel's Cinematic Universe starts. And neither the studio nor the fans could have wished for a better start. Because the third "Captain America" film is one of the best Marvel films ever. Anthony and Joe Russo, who had already directed "The Return of the First Avenger", did almost everything right that was criticized by critics and viewers in Zack Snyder's superhero duel. So the reasons why Captain America and Iron Man are at each other's throats after all these years of cooperation and friendship are quite understandable. It is well worked out why the conflict must escalate in such a way and why individual superheroes decide for one side or the other. And when it comes to the end of the second act to the big showdown between the two teams, the viewer gets to see a truly great superhero blob.

But that's not the real reason why this movie works better than "Batman vs. Superman", or much better than "Avengers: Age of Ultron". Even though there are some very good, sometimes very fast edited action sequences and spectacular special effects, the story is never lost sight of. And it has some really interesting aspects to offer that will change the dynamics within Avengers forever. The movie concentrates on the title hero and Iron Man in the first place. But the relationship between Vision (Paul Bettany) and Black Widow (Elizabeth Olsen) or Black Widow (Scarlett Johansson) and Hawkeye (Jeremy Renner) will also change noticeably as a result of the conflicts.

Besides the well-known heroes, which also include Ant-Man (Paul Rudd), the film also offers an amazing amount of space for two newcomers: T`Challa alias Black Panther (Chadwick Boseman) and the new Peter Parker alias Spider-Man (Tom Holland). These two characters are very well introduced into the Avengers-Universe, whereby the motivation of Black Panther to stand against the Winter Soldier is absolutely comprehensible and extremely well realized. His reason for hating Bucky and Captain America is another rather dark element of the story. Now you could assume that the movie as a whole is even darker and more serious than the almost humorless "Batman vs. Superman". But also here the Russo brothers prove again a perfect feeling for the right tone and the perfect timing. Because again and again the happening is loosened up with really amusing sayings and small gags. "The First Avenger: Civil War" isn't a pure superhero beating spectacle in which everyone involved is constantly running around with grim faces, but a big popcorn fun with a big wow factor, but also a good story and funny moments. And no matter how much I liked "Batman v. Superman" despite its obvious weaknesses, it becomes clear by direct comparison how well it would have done him if the story hadn't taken itself so terribly seriously - and if the motivation for the violent conflict had been worked out a bit better, as is the case here.

A short word about the actual villain of the movie, played by Daniel Brühl. Also it is a refreshing change to the usual opponents of the Avengers. His motivation is not the destruction of mankind or the attainment of world power. He is driven by very personal motives and uses means that could be described as subtle but extremely effective. This makes him a really interesting character, who brings a breath of fresh air into the universe of the Marvel villains just after the all-powerful Ultron.

"The First Avenger: Civil War" is truly not a perfect movie. But he serves his fans in the best possible way, makes up a lot of ground after the criticism of "Avengers: Age of Ultron" and offers not only Captain America, but also other heroes and the two newcomers a perfectly timed parquet. And as usual with Marvel movies, fans should definitely let the player play at the end credits, as there is still a mid-credits and an after-credits scene, which will tune in a little to the upcoming solo appearances of two superheroes. All in all, there is one clear thing for this amusing, exciting and rousing work: Absolutely worth seeing!

Picture + sound: Anything but first-class quality would have been a bitter disappointment with this Blu-ray. The picture is absolutely clean and the colors are mixed very atmospherically. The sharpness of the image is also very high and allows even the smallest details to come into their own, especially with the many dinosaurs. In addition, the 2D version Films also has a pleasant image depth, which is especially noticeable in the last third. The powerful and very lively sound mix is also convincing all along the line. Numerous sound effects ensure that the surround channels are almost completely in use. All in all, there's a deserved one here: Very good!

Extras: The main movie has a quite interesting audio commentary by the directors together with Christopher Markus and Stephen McFeely. In addition there is the two-part Making of (approx. 45 min.), as well as featurettes about Captain Americas perspective (approx. 4:11 min.) and Iron Mans perspective (approx. 4:27 min.). A preview of "Doctor Strange" (approx. 4:02 min.), four additional or extended scenes (approx. 7:52 min.) and a few amusing breakdowns from the shoot (approx. 2:53 min.) round off the additional offer. Good.

Fazit: "The First Avenger: Civil War" may not be perfect, but it offers its target audience the best entertainment with a good story, great effects and a good portion of humor. The Blu-ray delivers the blockbuster in first-class picture and sound quality. The extras are neat, though not really stunning. All in all applies to all MARVEL fans: Access absolutely!