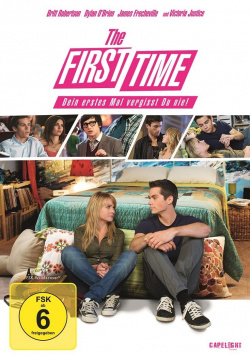 Film: Dave (Dylan O`Brien) is in love. Too bad he's just a good buddy for his dream girl Jane (Victoria Justice) and she only seems to have eyes for the cool guys at his school. But at a party Dave finally wants to take all his courage together and reveal his feelings to Jane. When he practices his passionate love speech, he is surprised by Aubrey (Britt Robertson). The two of them quickly get into conversation, in the course of which a very special chemistry develops between them. Something really big and romantic could come out of this - too stupid, though, that Dave's heart actually belongs to Jane and Aubrey is in a relationship with the older Ronny (James Frecheville). But she doesn't feel as well understood by him as she does by Dave, whom she only knows for a few hours. A turbulent weekend begins, at the end of which either the big luck or the complete chaos of emotions will reign...

"The First Time" is a really positive surprise. The opening credits let us expect a more pubertal party movie, which is nothing more than another "American Pie" copy. But as soon as the camera leaves the party and goes to the house where the nervous Dave prepares for his declaration of love to Jane, the whole thing quickly turns into an extremely charming, cleverly written and realistic romantic comedy. Director Jonathan Kasdan, who as the author of the wonderful series "Freaks & Geeks" ("Voll neben voll im Leben") has already proven a very good hand for the worries and hardships of teenagers on the threshold to adulthood, has created two main characters that don't seem like pure artificial products. Even though their word battles seem a bit too clever here and there (reminiscent of "Dawson`s Creek", another series Kasdan wrote for), Dave and Aubrey never seem to be off the hook. They thus provide perfect identification surfaces for the young target audience. But even older viewers can recognize themselves in many moments in these characters, which makes the film not just a pure teen movie, but an enchanting romance that transcends all generational boundaries.

The side characters, especially Dave's buddies Simon (Craig Roberts) and Big Corporation (Lamarcus Tinker), are also drawn very lovingly and accurately. The characters as well as the story as a whole aren't completely free of clichés, but they are also presented in such a charming way that the positive overall impression of the comedy is only marginally weakened by them. Nevertheless, "The First Time" is not a perfect movie. Especially in the long dialogue scenes between Dave and Aubrey, there are some small, somewhat bumpy staged lengths that lack the good timing that otherwise prevails. However, this also fits in with the closeness to reality that the film basically radiates. Because in reality there are also unpleasant lengths at the first meeting or at first physical approaches, moments in which the words do not cross your lips in a clear flow of speech or moments in which you simply do not know how to behave or what to say. From this point of view, the somewhat tougher moments don't really turn out to be a weakness - even though the pacing is noticeably slowed down by them.

That the movie only seems like a teenager version of "Harry and Sally" in its best moments, but that this level can't be maintained throughout the whole running time is a little bit of a pity. Nonetheless, "The First Time" is a really nice, well done teenager romance, that completely renounces the toilet humor and the rough sex joke that is unfortunately usual for this genre in the meantime and instead focuses on charming characters and real-looking feelings - without neglecting the humor. A very nice movie, in which not only teenagers, who like it a little bit more demanding than "American Pie", can have fun. Absolutely worth seeing!

Picture + sound: Unfortunately the picture of the DVD does not leave a good impression throughout. While the brighter shots have a good sharpness and a harmonious coloration, the darker sequences suffer from poor contrasts and an overall too dark mix. The sound is not a real revelation either, which is less due to the decent Dolby Digital 5.1 mix than to the fact that romantic teen comedies generally have little more to offer than dialogue and music. But since the conversations between Dave and Aubrey play the actual main role of the movie and they sound well understandable and powerfully mixed from the speakers, there is a more than deserved one: Good!

Extras: As a bonus there is only a slightly extended version of the opening sequence (approx. 13 min.), as well as the trailer for the movie.

Fazit: "The First Time" is a wonderfully refreshing change in the genre of teen comedy. Instead of rough humor and exaggerated characters, director Jonathan Kasdan focuses on clever dialogues, realistic situations and very real characters, with which you can also identify well as an adult. A really charming romance that can be warmly recommended not only to young viewers who are just experiencing their first love. absolutely recommended!