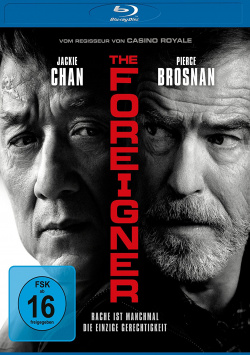 Film: Fate can sometimes be so cruel: The businessman Quan (Jackie Chan) loses his beloved daughter in a terrorist attack in London. Now the former Vietcong fighter is thinking of revenge. Desperately searching for the identity of Irish assassins, Quan turns to British government official Liam Hennessy (Pierce Brosnan), a former purified IRA member. But apart from empty promises, the traumatised Quan receives no help whatsoever from the government. And so he decides to take matters into his own hands and get Hennessy the information he needs in a different way…

"The Foreigner" is a thrilling revenge thriller with a gripping story and some great action sequences. Although the film was a great success in China and also went quite well in the USA, the film by Bond director Martin Campbell is only released here for home cinema. The story told here may not be very original. But the way it is implemented makes the whole thing very stirring and worth seeing. This begins with the two main actors, who really do deliver surprising performances here.

Jackie Chan is absolutely convincing as a revenge angel broken by grief. Of course he can also prove his martial arts and perform great stunts. But they seem much rougher and less exaggerated than one is accustomed to from him. This makes the duels that Quan has with his opponents extremely effective. But Pierce Brosnan can also convince, showing that he can do more than always play the charming sympathizer. As a shady, ice-coldly calculating politician, he delivers one of the most interesting depictions of him that one has been allowed to see in recent years.

The reviews interspersed here and there of the time in which Quan experienced the horror of war as a Vietcong fighter and which are supposed to show how he acquired his special fighting skills are the only slight disruptive factor of the film, since this kind of explanation is actually unnecessary. The viewer learns enough about the man during the course of the movie, so that these flashbacks don't really enrich the story. Moreover, the revenge campaign of the desperate man is so exciting that every form of side story only unnecessarily disturbs the actually good narrative flow.

That's just high level whining, though. All in all, Martin Campbell has staged a successful mixture of revenge and political thriller on a dramaturgical, acting and visual level, which provides the perfect food for an exciting and extremely entertaining home cinema evening. Absolutely worth seeing!

Picture + sound: The technical implementation of Blu-Ray is at a good level. The picture sharpness is fully convincing and also allows small details to come to the fore. The colour scheme is very atmospheric due to a deliberate reduction and the atmospheric pictures of London also underline the positive overall impression. The same can be said for the sound. This offers a very powerful sound carpet especially in the action scenes, but also lets the dialogues come into their own. Good.

Extras: As bonus material the Blu-ray has interviews with Jackie Chan, Pierce Brosnan and director Martin Campbell to offer. For about 30 minutes the three of them talk about their roles, their work on the film and the story. All in all, this is typical promotional material, but some interesting details are revealed in the interviews. A promotional clip for the US launch and a trailer are also included in the additional programme.

Fazit: "The Foreigner" is an excitingly staged and very well played revenge thriller, in which not only Jackie Chan, but also Pierce Brosnan can show himself from a different side. On Blu-ray, the film convinces not only with its dramatic quality, but also in terms of picture and sound. The extras are only typical promo material, but the interviews are still not uninteresting. Altogether there is a very clear one for the thriller: Absolutely recommendable!