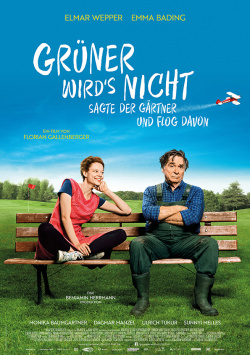 The gardener said it's not getting greener and flew away

Gardener Schorsch (Elmar Wepper) is grumpy. His business is on the verge of bankruptcy, his marriage is far from mutual affection, and his daughter doesn't even think about following in his footsteps, but rather wants to do something with art. And when the bailiff arrives and wants to seize his beloved propeller plane, Schorsch is enough. He gets on his plane and düst away. Because only above the clouds does he feel really happy. For the old gardener, a journey into the unknown now begins, on which he makes many acquaintances and realises that one cannot find happiness by running away from the unpleasant things in life…

"It doesn't get greener…" is a story about unfulfilled dreams, unusual friendships and about the fact that it is never too late for a new beginning - if one has the courage to break out of everyday life. Elmar Wepper is perfectly cast in the role of Schorsch, at first seemingly unsympathetic, who hardly has a nice word left for his wife and daughter, but then slowly reveals his charming, endearing side on his odyssey. His play, coupled with some really wonderful landscape shots, is almost enough to make this mixture of drama and quiet comedy worth seeing.

However, there is also a shortcoming. The movie has a very episodic structure and not every single part works really well. There is Schorsch's stopover at an eccentric castle owner (Ulrich Tukur). This part of the story is important, as Schorsch meets the young Philomena (Emma Bading), who becomes his companion on the further way. But the overdrawing of the figures, especially of Philomena's stepmother (Sunny Melles), seems strangely out of place. The part of history in which Schorsch discovers several new passions on a disused airfield in Brandenburg that will have a lasting influence on his life is very beautiful.

To the end the whole thing becomes really stirring and even goes to the heart. Until then, however, there are also many very lengthy, somehow trivial-looking scenes. If the movie works, it works really well. Florian Gallenberger succeeds convincingly in working out the characters and changing them in the course of the story. What he succeeds in doing less well, however, is to trace the journey of the characters - Schorsch, his wife or Philomena - just as convincingly and captivatingly. So "Grüner wird`s nicht…" is a nice film, but in the end it falls short of its possibilities. Worth seeing with some concessions!

Kino Trailer zum Film "The gardener said it's not getting greener and flew away (Deutschland 2018)"
Loading the player ...