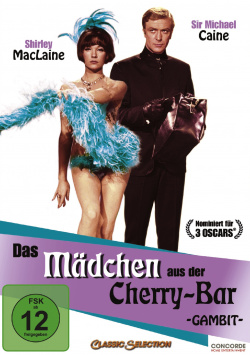 The girl from the Cherry Bar - DVD

Contents: The ingenious trickster Harry Dean (Michael Caine), together with his crony, the art dealer Emile (John Abbott), has devised the perfect robbery: they want to steal a valuable artefact from a reclusive billionaire, the Arab prince Shahbandar (Herbert Lohm). The nightclub dancer Nicole (Shirley McLaine) from Hong Kong is supposed to provide them with access to Shahbandar's almost perfectly sealed-off dwelling, as she looks very similar to the billionaire's deceased wife. For Harry, things are simple: as soon as he shows up with Nicole at the prince's hotel, he will contact them to meet his wife's doppelganger. He'll be so fascinated by her that he'll forget everything around him. And while Nicole distracts him, Harry will get into Shahnandar's apartment, steal the artifact and take it to safety before the police check his luggage at the airport. A foolproof plan, actually. But unfortunately the reality looks quite different...

With "The Girl from the Cherry Bar" Ronald Neame ("Poseidon's Flight to Hell") staged an amusing gangster comedy in 1966, which works really well over long distances even after almost five decades. So it's no wonder that the Coen brothers took this film as a basis for their script for the movie "Gambit", which was released in 2013. With Michael Caine, Shirley MacLaine and Herbert Lom, the chief inspector Dreyfuss from the "Rosaroter Panther" films, the film is very well cast, with MacLaine and Caine even being nominated for a Golden Globe. The costumes and equipment of the film as well as the sound were honoured with an Oscar nomination.

But what really makes the film successful is its amusing script. Especially amusing is the discrepancy between what Harry Dean imagines and what really happens. Thus, the movie in the first third is also more of a straightforward crook comedy with rather reserved humor and a lot of coolness, which especially emanates from Michael Caine, who almost acts in James Bon's manner. Shirley MacLaine plays her role here without even saying a word, which gives her a real mystical aura. When it becomes clear, however, that reality looks completely different, more and more slapstick and over-twisted wit take over the helm. This also works very well and provides 104 minutes of entertaining entertainment, which could only have been a bit tighter and less silly here and there.

Surely, the ravages of time have obviously gnawed at some aspects of the movie. But even if some things seem a bit antiquated, "The Girl from the Cherry Bar" is still a lot of fun today. If you like amusing comedies from the 60s or if you could already laugh about the remake, you should definitely take a look at this new edition. Worth seeing!

Picture + sound: Assuming that the film has 47 years on its back, the picture and sound quality of the new edition are really convincing. The picture is largely pleasantly sharp and appealingly colourful. There are also only a few minor contaminations. Surely, this DVD cannot compete with a current blockbuster production shot with HD cameras. But for a classic there is little to criticize here. Of course, the mono tone is also somewhat powerless. The dialogues, which are important here, are always easy to understand and the music is well mixed. And for that there is a satisfied one: Good!

Extras: Unfortunately the DVD has no extras to offer.

Result: "The Girl from the Cherry Bar" is an amusing 1960s crook comedy that can comfort you with a few delicious ideas, charming characters and witty dialogues over a few shorter lengths. The film's quality is supported by the fact that it can be entertaining even after 47 years and despite its smaller trailer simply offers a good mood. The DVD-implementation is technically well done, the lack of bonus material can also be a pain in the face of the age of the movie. Altogether applies: for friends of classical American crook comedies absolutely recommendable!