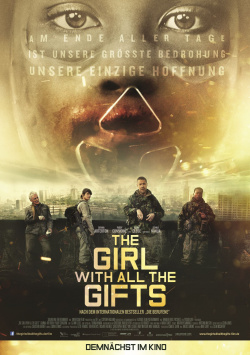 The Girl with all the Gifts

England in a not too distant future: Most people have been transformed into wild, carnivorous zombies by aggressive fungal spores. However, there is a small glimmer of hope: a group of infected children can still communicate normally and have their hunger for human flesh largely under control. It is they with whose help the scientist Dr. Caldwell (Glenn Close) wants to win a remedy against the infection on a military base. When the base is overrun by the zombies, Caldwell manages to escape together with the young teacher Helen Justineau (Gemma Arterton), Sergeant Parks (Paddy Considine) and the girl Melanie (Sennia Nanua). As the only survivor of the children's group, Melanie is now the last hope for mankind - provided that the small group will survive the search for a safe haven…

If there is a horror genre that is currently somewhat overused, it is undoubtedly the undead. Zombies currently dominate cinema, television, graphic novels and videogames. And even if there are some really original ideas every now and then, it seems that everything about zombies has already been told. "The Girl with all the Gifts" manages the trick to get something surprising out of it all. Director Colm McCarthy ("Peaky Blinders", "Sherlock") uses many well-known set pieces to create something refreshingly unspent.

With quite simple means he creates a gripping end-time mood in which real tension can develop even in quieter moments. With a mixture of "The Walking Dead" and "Flowers of Terror" McCarthy creates a gloomy future scenario, which at first glance may seem all too familiar to connoisseurs of the genre. But through some cleverly used twists he manages very well to keep the interest of the audience apart from the well staged zombie attacks on the story and its characters.

Thereby also the end works so excellently. In retrospect, it may not really be surprising - but you just don't see it coming. Thus the film leaves a lasting impression and doesn't quickly fall into oblivion in the jumble of countless zombie films of recent years. Those who expect non-stop horror may be disappointed. But if you want to see some subtle zombie-food with good actors and a surprising ending, you shouldn't miss this little genre-pearl! Absolutely worth seeing!

Kino Trailer zum Film "The Girl with all the Gifts (Großbritannien/USA 2016)"
Loading the player ...