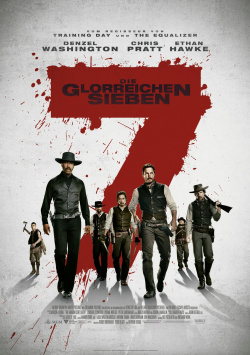 The inhabitants of the small town of Rose Creek are desperate: The unscrupulous Bartholomew Bogue (Peter Sarsgaard) threatens to kill anyone who doesn't sell him his land for a ridiculous price. His wealth allows Bogue to gather an army of cold-blooded mercenaries around him, whose fingers sit very loosely on the trigger. In desperation, the Rose Creek residents turn to the legendary bounty hunter Sam Chisolm (Denzel Washington), who will not be intimidated by any opponent. With Josh Farraday (Chris Pratt), Goodnight Robicheaux (Ethan Hawke), Jack Horne (Vincent D’Onofrio), Billy Rocks (Byung-Hun Lee), Vasquez (Manuel Garcia-Rulfo) and Red Harvest (Martin Sensmeier) at his side, seven outlaws, players and gunslingers are set to take on an entire army. But Chisolm has a plan - which could be fatal not only for Bogue…

With "Die glorreichen Sieben" Antoine Fuqua has staged the remake of a remake of a classic samurai film. The Western version of Akira Kurosawa's "The Seven Samurai" (1954) from 1960, with its legendary title music, fantastic landscape shots and battle scenes spectacular for its time, is one of the absolute masterpieces of the American West. Often the film has already been quoted or satirized. In addition, there was an attempt in 1999 to convert the material into a television series - albeit with rather modest success. Now director Antoine Fuqua tries a new interpretation. And she's quite respectable.

Because instead of staging a unique remake, Fuqua has given the story a new polish and made it his own. The oppression and brutal expulsion of the people from their land by a powerful businessman who wants to exploit the area known for its gold deposits cannot be denied a certain topicality. Since this is not the first time that Bogue has taken what he wants at any price, only to enrich himself at the expense of others, some of the men who stand against him also give a very special motivation.

Beyond that, the film is also very well staged in terms of craftsmanship. The landscapes are wonderfully captured, the music - the last work of James Horner, who died far too early - is very atmospheric and the actors are well cast throughout. However, some of the characters remain too pale to leave a lasting impression alongside the big four of the glorious seven - Denzel Washington, Chris Pratt, Ethan Hawke and Vincent D´Onofrio. Moreover, there are some extreme lengths especially in the middle section, which make it clear that the movie could have stood a bit more pacing and a little bit of self-deprecating humor. Even the extremely leaded and bloody finale doesn't help much to catch that again.

So the remake of "The Glorious Seven" hasn't become a perfect, but an extremely entertaining Western, which perhaps doesn't quite play in the league of its 1960s predecessor, but doesn't have to hide from a comparison either. If you like Western and don't mind bloody shoot-outs, you should definitely buy a ticket for the ride with Dezel Washington and Co. through the prairie. Absolutely worth seeing, with small concessions!