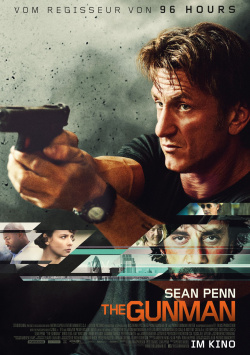 Together with his girlfriend Annie (Jasmine Trinca) Jim Terrier (Sean Penn) works as an NGO employee in Congo. What Annie doesn't suspect is that her boyfriend is a mercenary who has been ordered by an economic corporation to take out a high-ranking minister. The assassination succeeds, but Jim has to leave the country immediately without saying goodbye to Annie. Years later, he apparently broke away from his mercenary activities and started working for an NGO in an African crisis region again. But when a village where he works on a well is attacked by armed men who are apparently looking for him, he realizes that he can no longer run away from his past. With his former employer, who has now placed a bounty on him, Jim now delivers himself a dangerous cat-and-mouse game that takes him from Africa across Europe. And when Annie gets into danger, things get really personal...

With "96 Hours - Taken" Pierre Morel made Liam Neeson an unexpected action star some years ago. Now, in "The Gunman", he sends the next aging character mime onto the lead-bearing action track. And Oscar winner Sean Penn is also doing very well as a muscle-bound pensioner Rambo. Although he reduces his facial expressions to an absolute minimum, one is tempted to believe that he had taken a course at the Steven Segal School of Facial Expression in preparation for this role. And in the more dialog-heavy scenes this almost becomes his downfall, as he can't catch the rather flat dialogues with his play. But whenever the action picks up speed and Penn is allowed to let fists and guns speak, it becomes clear that Morel has once again proven a good hand in choosing his main character.

The script isn't exactly the movie's strength. The story has some considerable logic holes, the big twists are not as surprising as they would like to be, and the characters are drawn very clichéd. Moreover, the talent of great supporting actors like Idris Elba and Javier Bardem is used only marginally. Nevertheless, the movie as a whole has a quite high entertainment value. The visual language is atmospheric, the staging has a decent pacing in most moments and some of the action sequences are not only well choreographed, but actually also provide something like real suspense.

That's of course not enough to make "The Gunman" stand out from the crowd of similar action productions. The only unique selling point of the strip is the fact that the two-time Oscar winner Sean Penn can be seen in a rather unusual role. However, if you combine Penn with depth of character and sophisticated dramaturgy, you will certainly not enjoy his excursion into action. If, on the other hand, you only want to see an appealingly filmed, technically absolutely solid thriller in the style of the "Taken"-movies, you'll get your money's worth for most of the time. And therefore, despite some obvious weaknesses, there is still a satisfied one at the end: Worth seeing!