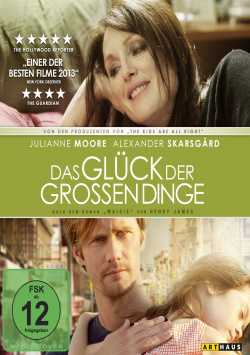 The Happiness of Big Things - Blu-ray

Film: The former happiness of their marriage has left little for rock icon Susanna (Julianne Moore) and British art dealer Beale (Steve Coogan). Beale spends most of his time in the office or abroad and as soon as he gets home, the rags fly between him and his spirited wife. The victim is their six-year-old daughter Maisie (Onata Aprile). Although her nanny Margo (Joanna Vanderham) tries to distract the child as much as she can, Maisie becomes more and more involved in the dispute. The situation escalates when the parents split up and a custody dispute breaks out. While Beale, who begins a relationship with Margo, has the better cards in court, Susanna tries to improve her chances of obtaining custody through a spontaneous marriage with bartender Lincoln (Alexander Skarsgard). Maisie is pulled back and forth and only feels really happy when her parents leave her in the care of her new partners for professional reasons. With Lincoln and Margo the girl experiences happiness and light-heartedness, which can't be permanent...

"The happiness of big things" is the adaptation of Henry James' novel "Maisie". The story of the novel published in 1897 was moved to the New York of the present day and modernized elsewhere. The filmmakers Scott McGehee and David Siegel, who have been working together as a directing duo since the 1990s, have told a very sensitive family story from the perspective of a divorced child. In doing so, they largely do without the usual way of being affected by such stories and prefer to rely on reality, discreet irony and an honest character drawing.

The film profits immensely from this. The parents played by Julianne Moore and Steve Coogan could easily have degenerated into clichéd decals. But the script by Nancy Doyne and Carroll Cartwright and its excellent realization by the two directors show not only the character weaknesses of these characters, but also the great love for their child, which is pushed aside by too big egos and broken self-esteem. On the other side are Lincoln, wonderfully played by Alexander Skarsgard ("True Blood"), and Margo, who, if they got together, would make the perfect parents for a child like Maisie. These characters and their development also protect the staging from any form of kitsch and clichés.

Even though the story is heading absolutely predictably towards its sentimental, but not exaggeratedly kitschy finale from a certain point in time, the film appears pleasantly unadjusted and unconventional. This is the best American independent cinema that finds the perfect balance between entertainment and aspiration, between humour and drama. But the big plus point, through which "The Happiness of Big Things" can also leave a lasting impression, is the young leading actress Onata Aprile, who delivers a really great performance with great talent and a refreshing naturalness beyond the exaggerated cuteness of many children. You can see how Maisie longs for harmony and how she slowly but surely threatens to lose her childlike lightheartedness because of her parents' quarrels. A great performance, which is in no way inferior to those of their adult co-stars.

"Das Glück der grossen Dinge" treats a not exactly nice topic in a very nice way and thus turns a divorce drama into a real feel-good movie, without diluting the topic itself or trivializing the consequences for children. Anyone who appreciates American arthouse cinema should not miss this very special family drama. Absolutely worth seeing!

image + sound: Warm colours, a good overall sharpness and a pleasant image depth, which is especially noticeable in the outdoor shots, ensure that the visual conversion of the film for the Blu-ray leaves an overall very good impression. In some moments there is still potential for qualitative improvement in the detailed presentation, but this only has a marginal negative impact. As not uncommon for a rather quiet drama of this kind, the sound doesn't offer any real surround fireworks despite a DTS-HD MA 5.1 mix. But especially in the moments when the story takes place on the streets of New York or by the sea, the sound is very lively and atmospheric. Good!

Extras: As a bonus the disc offers only the trailer and four cut scenes (approx. 7 min.), to which also a music video of Julianne Moores film tape belongs.

Fazit: "The Happiness of Big Things" manages to turn a difficult story into a real feel-good film without glossing over or diluting the subject and degenerating it into excessive emotional kitsch. The great actors, above all the young main actress Onata Aprile, contribute a lot to the fact that the divorce drama has become a really wonderful movie, which hopefully gets the deserved attention in the home cinema, which it unfortunately didn't get in the cinema. For lovers of the more demanding American cinema absolutely recommendable!