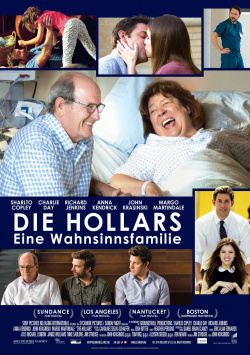 The Hollars - A Wicked Family

For many years John Hollar (John Krasinski) was no longer at home in the small town where he grew up. But when he learns that his mother (Margo Martindale) is seriously ill, he immediately sets off from New York to help his father (Richard Jenkins) and his brother Ron (Sharlto Copley) in this difficult time. But he is not exactly welcomed with open arms. Ron is angry that John hardly contacts John, his father is worried about his wife and the small family business that is about to end and nurse Jason (Charlie Day) makes him clearly feel that he can't stand him because John is the ex of his wife Gwen (Mary Elizabeth Winstead) and he is therefore a real threat to Jason. But while his past is about to break over him, John prefers to draw a line under it. After all, he will soon become a father himself and must look to the future. But his concern for his mother soon makes him see his own problems in a whole new light…

"The Hollars" is the second feature film directed by actor John Krasinski, who has also taken on one of the leading roles. The film has many great strengths - from the good-humoured ensemble to a balanced mixture of comedic and emotional moments to the atmospheric soundtrack. But there is also a weakness: the direction lacks any originality. Krasinski seems to have thrown together the best of all the indie family films of recent years. The conflicts within the family are as conventional as John's obvious fears of attachment. And even a terminally ill family member is not exactly something you have never seen before.

The problem is that not all of these set pieces fit together harmoniously. Some action elements seem unnecessary or immature, while others are a little too long. That doesn't make the film bad by a long shot, but it prevents it from being remembered for a long time. Nevertheless, it cannot be denied a rather pleasant entertainment value. The actors are just too good and the production too charming for that. And so despite some weaknesses the story can unfold the necessary emotional effect towards the end. The Hollars somehow grow close to your heart and you share their fear whether Mother Sally will survive the dangerous surgery or not.

Who likes American independent cinema and appreciates movies like "Garden State" or "Away we go" will also enjoy "The Hollars". A film that makes its audience laugh but also cry. Thus the mission is fulfilled despite justified criticism and there is still a proper one: Worth seeing!