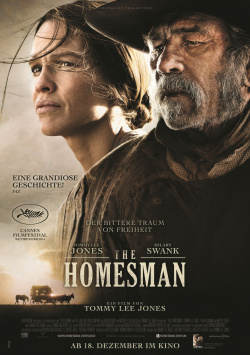 Mary Bee Cuddy (Hilary Swank) tries to assert herself as a single woman in the middle of the 19th century in the barren expanses of the Wild West of Nebraska. Her little piece of land throws away enough for a decent life, but no man wants to share it with her. Yet Mary doesn't let the hope of a happy future be taken away from her. Until then, she stands her own man. And so it is also she who agrees to lead three farmer women (Grace Gummer, Miranda Otto and Sonja Richter), who have lost their minds, to a Methodist church in the East, where the women can get the necessary care. The outlaw Briggs (Tommy Lee Jones), whom Mary has saved from the gallows, is supposed to accompany her on the hard way and guarantee her safety. That is also necessary, because on the journey all kinds of dangers like storms, hunger, other settlers and Indians wait for the women. Although Mary and Briggs keep clashing, she soon realizes that he is a really good person under his uncouth shell - a realization that makes her make a serious decision…

With "The Homesman" Tommy Lee Jones delivers his second directorial work after "Three Burials - The Three Funerals of the Melquiades Estrada". His very unusual western fascinates with great pictures of cameraman Rodrigo Prieto ("Brokeback Mountain") and a strong cast, in which even small supporting roles with stars like Meryl Streep, James Spader or John Lithgow are first-class cast. But the film belongs to four strong women, led by a great Hilary Swank. The two-time Oscar winner, with her rather withdrawn play as a pioneer woman marked by the harshness of life, carries the often very quiet events over long distances all by herself. Tommy Lee Jones, a rough swashbuckler with a loose mouth, is the perfect counterweight to the god-fearing, somewhat hardened Mary. This is important because the strong contrast between the two characters creates some very amusing, loosening moments that make the rest of the film, which is dominated by an enormous heaviness, bearable.

The story told in "The Homesman" is damn hard stuff. The fate of the three women Mary's supposed to bring to the East really gets to you. The game of Meryl Streep's daughter Grace Gummer, Miranda Otto ("Lord of the Rings") and the Danish Sonja Richter is often difficult to bear in its intensity. It's simply extremely good to take a deep breath or even laugh in between. Thus, the really surprising twist in the last act can be endured, which pulls the emotions of the audience down once more.

"The Homesman" is no easy cinema entertainment. However, Tommy Lee Jones shows that even heavy, bulky material can be presented in an entertaining way, that it doesn't lose any of its actual power and meaning, but at the same time is accessible to a wider audience. That doesn't make this Western a mainstream product. But at least it makes sure that not only the arthouse audience is addressed. Anyone who appreciates powerful films about human borderline experiences, who likes magnificently filmed acting cinema and who doesn't let himself be deterred by difficult subjects shouldn't miss this story about a broken pioneering spirit and the dark side of the American dream. Worth seeing