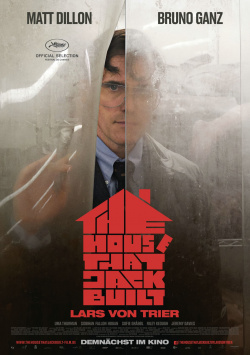 The House that Jack built

Jack (Matt Dillon) is a killer. Icy cold, highly intelligent, merciless. He tells a mysterious counterpart (Bruno Ganz) about five murders he committed over a period of twelve years. Truly not his only murders, but those that exemplify his development as a serial killer. Murders that reveal his ultimate goal: A collection of all his murders manifested in a house he built himself. But Jack becomes more and more careless, leaves traces - and so the foundation, which was built so carefully in the beginning, could quickly collapse…

Lars von Trier is known for provoking. His latest work "The House that Jack Built" is no exception. The film demands a lot from its audience. Beside previous knowledge in art history also really good sitting meat and a stable stomach. Because when it comes to depicting violence, von Trier really does overshoot the mark in at least one scene. One has to attest to the filmmaker that his films (almost) always have something fascinating about them, even if they may be repulsive at times. But someone who renounces subtlety just to provoke is not a good director in my eyes.

This film is the perfect proof. He would have been much more effective had von Trier shown less. This refers not only to the representation of violence, but to the complete last act. As a viewer, you quickly know who Jack is talking to. You don't have to get that explained and shown in an overlong, completely unnecessary sequence. Because in itself the film has a certain charm. Matt Dillon is frighteningly good as a serial killer with obsessive-compulsive neuroses, who gradually becomes more and more unscrupulous and negligent. And the moments in which some bizarre humor creeps into the whole thing are really good.

However, then von Trier must absolutely show what other filmmakers are afraid of. He can, because he's an artist. At least enough people still believe that. But let's be honest: this "artist", who also repeatedly makes headlines with very questionable remarks, really can't be really clean in his head. Otherwise he too would have realized that this movie has some scenes that he wouldn't need in order to work, and that are simply beyond good taste. And that's why there's one for this work of art: Really only worth seeing for hard-boiled Lars von Trier admirers!