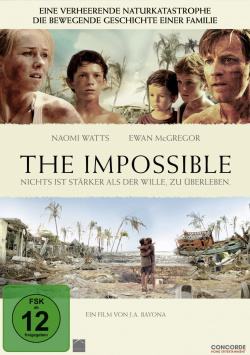 Film: Thailand in December 2004: Actually it should be an idyllic Christmas vacation for Henry (Ewan McGregor) and Maria Bennett (Naomi Watts) and their three sons. In a luxurious holiday resort right by the sea, the family just wants to relax and celebrate Christmas together. But after a harmonious Christmas Eve, the dream holiday turns into a nightmare the next morning. As the family begins the day relaxed at the pool, the coast is hit by a huge tsunami that causes destruction and chaos far inland. The huge tidal wave also separates Maria from her family. While after the first wave she can still find her eldest son Lucas (Tom Holland) and bring him to safety, she is convinced that Ewan and her younger children did not survive the catastrophe. Seriously injured, Maria and Lucas drag themselves inland in the hope that their wounds can be treated here and that Lucas doesn't have to lose his mother as well. She has no idea that Henry, Simon and Thomas have also survived and that their husband has already started a dangerous and desperate search...

After director Juan Antonio Bayona has dealt with supernatural horror in his feature film debut "Das Waisenhaus" (The Orphanage), he dedicates himself to a very real horror with his successor "The Impossible". The film is based on the true story of a Spanish family that survived the catastrophic tsunami of 26.12.2004. More than 200,000 people died in the earthquake and more than 1.7 million people who lived on the coast around the Indian Ocean lost their homes. A catastrophe of unimaginable proportions which, from the point of view of a few people, makes Bayona an impressive and extremely moving experience.

No question, Bayona's production is highly manipulative. The partly very pompous film music, the close-ups of big children's eyes and the certainly somewhat exaggerated dramaturgy press absolutely shamelessly on the tear gland. And even if the whole thing is a bit too much of a good thing at times, it is extremely effective for those viewers who can get caught up in it. During the press screening, for example, there were a number of colleagues who were far too busy with the staging and who described the film as pure kitsch. But on the other hand, there were also those who had the film very much at heart and who constantly had tears in their eyes and a thick lump in their throat. I myself belong to the latter group.

The frighteningly real-looking implementation of the deadly tidal wave provides the first real goose bumps and shock moments. The sequence, which lasts several minutes, literally takes your breath away, is oppressive and at the same time drives your adrenaline up. And when Maria discovers her injury, it is the first real shock moment of the film. From this scene on, the story is told at a much more leisurely pace, which does not diminish its intensity at any moment.

This is not only due to the impressive images, but also to the strong actors. And here one must be particularly emphasized: Tom Holland. What the boy delivers here and how he plays the also very good professionals Naomi Watts and Ewan McGregor against the wall is absolutely impressive and contributes a lot to the emotional power of the movie.

One could blame the movie for not dealing enough with the numerous victims in the already impoverished population, for focusing instead on a white, well-off family and for treating the real misery almost incidentally. But that's exactly how Bayona manages to draw the viewer into the action. He gives the audience real figures of identification, breaks down any cultural or linguistic barrier and thus enables the audience to experience the catastrophe up close. And that's exactly why "The Impossible" can work so well. Those who quickly regard musically sumptuously underlined emotional outbursts as kitsch and prefer to get emotions served subtly and very reservedly in the movie will not be able to make much of this drama, though. But if you get involved in this very direct staging and simply want to see a strong, extremely moving drama, you shouldn't miss this work. Absolutely worth seeing!

Picture + sound: Technically, the DVD implementation of the film is on a good level. Sharpness, colouring and contrasts capture the atmosphere of the story well. Here and there, smaller details are lost due to somewhat exaggerated contrasts, but overall the positive and clean overall impression of the picture prevails. The sound unfolds its full surround power at the beginning of the movie, which is later reduced again. The many quieter scenes are then determined by the dialogues and the music, but numerous ambient noises and smaller sound effects provide pleasant dynamics again and again. Good!

Extras: The supplement sounds richer than it is in the end. Besides a very short making of of 5:38 minutes, which unfortunately can only scratch the surface, there is also a short documentary about the cast (about 6:20 min.), five missing scenes (about 8:31 min.), as well as the trailer for the film. The most interesting extra is an unfortunately not subtitled audio commentary by the director, which he recorded together with producer Belena Atienza, screenwriter Sergio Sánchez and Marie Belón, on whom the character of Maria Bennett is based.

Fazit: "The Impossible" is not a particularly subtle drama. The viewer is manipulated with quite obvious means. What some might be bothered by can cause others, who get involved, to be carried away and extremely touched by this story based on true events. The Impossible" is a great emotional cinema, which presents itself on the DVD in good picture and sound quality. absolutely recommended!