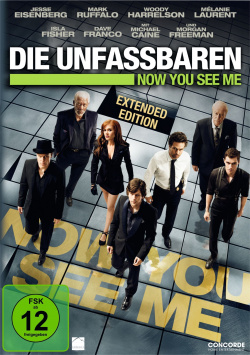 The Incomprehensible - Now you see me Extendet Edition - DVD

Film: Although film can sometimes be real magic, magicians don't always have it easy even in the cinema. Recently the amusing but unfortunately not very successful "Burt Wonderstone" could sing a song about it. But now director Louis Leterrier ("The Transporter") sends a whole troupe of illusionists into the race, who not only amaze the audience, but first and foremost should entertain them well. A mysterious invitation brings together the four magicians Atlas (Jesse Eisenberg), his former assistant and celebrated escape artist Henley (Isla Fisher), the mentalist and hypnotist Merritt (Woody Harrelson) as well as the up-and-coming magician and pickpocket Jack (Dave Franco). Together they will present "The Four Horsemen" in Las Vegas, the ultimate show in which the audience is shown illusions the world has never seen before. A year later, this show actually goes on stage, but the enthusiasm of the audience hardly wants to end after the spectacular finale. Because the four of them have achieved something impossible: they make a spectator disappear and reappear in the vault of a Parisian bank. In front of the confused man's eyes, several millions dissolve into smoke, which then rain down on the audience in Las Vegas. All this looks like a perfect illusion. But when it turns out that millions of euros have indeed disappeared in the Parisian bank, the FBI agent Rhodes (Mark Ruffalo) is called to task. Together with his Interpol colleague Alma Dray (Mélanie Laurent), he wants to put a stop to the magic. But of course they still have a few tricks up their sleeves to inspire people and drive the FBI to despair. Only the legendary Bradley (Morgan Freeman), who earns his money by disenchanting illusions, could screw up the "Four Horsemen" tour...

"The Unfathomable" is not necessarily a spawn of logic. Here the fun is clearly in the foreground. And this is only possible if the story and its various twists and turns are not too much questioned. Admittedly, the grand finale is a bit disappointing and already seems a bit like lazy magic. But the way to get there is so entertaining, cleverly constructed and played in a good mood that it's hard to be angry at the end, that one somehow feels cheated. Leterrier's staging is so fast-paced, peppered with amusing word battles and captivatingly staged tricks, that even for a second something like boredom doesn't come up.

Rapid chases alternate with the spectacular tricks of the four magicians, who are all exposed in the course of the film, but lose nothing of their entertainment value as a result. The fact that Leterrier was also able to drum up a really great cast of actors in front of the camera is the icing on the cake on a very tasty whole. When great young talents like Jesse Eisenberg or Mélanie Laurent meet great old stars like Michael Caine and Morgan Freeman, when Woody Harrelson is allowed to play against a very dogged Mark Ruffalo in a wonderfully smug manner, then watching them is just as much fun.

Surely, "The Incomprehensible" is not really full of content. But the film doesn't even try to be more than pure entertainment. A light-hearted popcorn fun, which seems a bit like David Copperfield's version of "Ocean`s Eleven", spiced with some crunchy action interludes. If you don't expect more and don't get on your nerves with a "That's completely illogical", you will certainly enjoy this US surprise hit a lot. Therefore: Absolutely recommendable!

Der Extendet Cut: For home cinema evaluation, the film was extended by almost 10 minutes. In most cases, existing scenes were extended minimally. Only four really new scenes made it into this extended cut. It doesn't really change the plot, yet the new scenes as well as the extended ones all have a high entertainment value. The already good narrative flow of the cinema version is also not slowed down, which is why this longer home cinema version can definitely be preferred. Only at the somewhat messed up end nothing was improved here either.

image + sound: The technical realization of the film is on a good level for a current production of this size. The picture is absolutely clean and shows a high sharpness, which can convince especially in the brighter scenes with a very good detail representation. The German soundtrack is available as Dolby Digital 5.1 track as well as DTS mix. The latter is a bit more spatial than the DD 5.1 mix, but it can also please with a good tuning of the dialogues to various sound effects and a proper use of the surround channels. Good!

Extras: Besides three very easy to discover Easter Eggs, the DVD also has a commercial making of (approx. 15:01 min.) and a short excursion into the history of magic (approx. 11:22 min.) to offer. If you want to see even more extras, you should go for Blu-ray, which still has some distant scenes to offer that aren't to be seen in the extended version of the movie. Good!

Fazit: "The Unfathomable" is a light-hearted popcorn fun that may not be very logical, but is extremely entertaining. Louis Leterrier's staging is fast-paced, humorous and, in a certain way, exciting, which even the somewhat disappointing ending doesn't cloud further. For home cinema exploitation, the film was extended by almost ten minutes worth seeing, which do not enrich the dramaturgy, but the entertainment value. The good technical implementation then also ensures that at the end there is a clear "recommendable"!