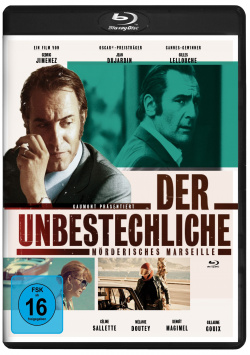 Film: As a juvenile judge in Marseille in the 1970s, Pierre Michel (Jean Dujardin) repeatedly saw what drugs can do to young people. When he is promoted to judge of organized crime, it gives him the chance to get to the root of the problem. But for that he has to mess with Gaëtan 'Tany' Zampa (Gilles Lellouche), the head of the so-called "French Connection". "La French" controls the whole city, earning a lot of money there by extorting protection money, which they then invest again in a perfectly organized import-export business with high-quality heroin. The arms of "La French" already reach to New York. So far, no one has ever fought with the powerful drug godfather, but Michel is determined to put a stop to it. But he quickly realizes that he will not succeed with legal means…

"The Incorruptible" is based on the true events that inspired William Friedkin's classic "French Connection - Brennpunkt Brooklyn". And so director Cédric Jimenez obviously bows to this masterpiece of gangster film in one scene. Apart from that, however, he goes his own way, which in the end leads to a great thriller cinema of the old school. Immersed in a very authentic 70s look, Jimenez tells an extremely gripping story, which is enhanced by some extremely stirring moments of tension, great actors and elegantly implemented action sequences.

Jean Dujardin, who has so far attracted particular attention in comedic roles, delivers as a dogged judge a strong and convincing performance as Gilles Lellouche as godfather of Marseille. It's not the first time that the two French superstars can be seen together in one film. But with such intensity as can be felt here, they have not yet encountered each other. The duel between the two, which is actually meant to end in a tragedy, is undoubtedly the most gripping aspect of a thriller that also knows how to entertain on other levels.

Cédric Jimenez knows how to build up suspense by taking the time to develop the story and its characters and not just to focus on fast-paced, yet meaningless action. Thus the gangster drama develops into a merciless power struggle, especially in the last third, in which even for Pierre Michel it is no longer only about moral justice. If you appreciate classic thriller cinema with interesting characters and if you place more value on a sophisticated story than on lead-laden action, you should definitely take this opportunity. Absolutely worth seeing!!!

image + sound: The image of the Blu-ray presents itself in very warm colors and has a good to very good overall sharpness. Here and there there there are minor weaknesses in the detail display, which occur especially in darker moments. However, this also supports the very authentic 70s look and is therefore not really a weakness. The DTS-HD Master Audio 5.1 Mix lets the dialogues sound very powerful from the front. Some sound effects and ambient noises repeatedly provide some movement in the surround range, which is then convincingly filled with life in the action-heavy sequences. Good!

Extras: The heart of the extras is a Making of, which is pleasantly extensive with 53:15 minutes. Interviews and insights into the shooting will provide an interesting overview of the production of the thriller. Additionally there are some cut scenes (approx. 6:17 min.), as well as the trailer and further program tips of the offerer. Good!

Result: "The Incorruptible" is first-class thriller cinema of the old school. Director Cédric Jimenez has staged a first-class gangster epic, which scores with a stirring story, a harmonious 70s set, great actors and a successful mixture of action, drama and character development. A great film that would have deserved to be seen by a wide audience on the big screen. But also the home theater realization is pretty good and also offers some good extras with a good making of and cut scenes. But there is a very clear one: Absolutely recommendable!