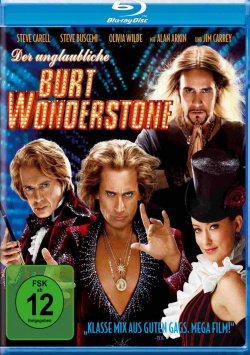 Film: Las Vegas - the city of lights, casinos and big shows. For years the magician duo Burt Wonderstone (Steve Carell) and Anton Mervelton (Steve Buscemi) with their illusions have been inspiring the audience. But over the years, Burt in particular has lost his earlier enthusiasm for magic. Routine, complacency and meaningless affairs now determine the everyday life of the popular magician. But times change and soon the illusions of the duo no longer seem fascinating, but only old-fashioned. Street magicians like Steve Gray (Jim Carrey) with their unconventional tricks are the future of the magician business. Even casino owner Doug Munny (James Gandolfini), who leaves his former stars only one option: either they modernize their shows and fill the auditorium again, or they end up on the street. Reluctantly Burt and Anton reach for the last straw. But when this attempt fails miserably, the once so good friends quarrel and go their separate ways. For Burt this also means the end of his big Las Vegas show. For his career there is only one direction left - and that leads directly to the cellar. In order to be able to play at the top again, Burt would have to regain his old enthusiasm for magic. But that seems to be gone forever...

In "The incredible Burt Wonderstone" director Don Scardino takes an amusing and biting look behind the scenes of show business. Similarities with Las Vegas acts like Siegfried and Roy and street magicians like David Blane or Chris Angel are of course absolutely unintentional and only coincidentally so perfectly hit. While the trailer suggests extremely exaggerated absurdities, the film itself is largely free of cheap jokes and exaggerated racket. Sure, subtle humor isn't exactly conjured out of the hat here. But Scardino always manages to keep the whole thing within a harmonious framework. He rather focuses on nice absurdities, classic slapstick and clever side blows to show business, which at least in the English original version are still enriched with wonderful wordplay.

Why the comedy works so well that it takes the world of magicians for a ride, but only makes fun of certain aspects. Here, self-promoters and unscrupulous businessmen are taken for a ride, but not the people who have dedicated themselves to magic because they love to amaze people and make them dream. This is the only reason why a character like Burt Wonderstone, who has mutated into an arrogant puke due to his success, can still become a popular figure, which is indispensable for the success of the film.

No less important, of course, are the actors. And here Scardino hit the bull's eye several times. While Steve Carell is responsible for some wonderful laughs, especially in the moments when he is completely in love with himself, greasy and hostile to women, Steve Buscemi can convince as his somewhat naive, but nevertheless somehow loveable partner. Olivia Wilde as an ambitious assistant Jane is fortunately much more than just a feast for the eyes and with Michael "Bully" Herbig also a popular German actor appears in a very small but funny supporting role. But the secret star of the movie is undoubtedly Jim Carrey, who as Burt's rival Steve Gray is just great. The fact that he clearly reduces his usual grimacing and plays his character with an almost exaggerated seriousness makes his portrayal all the more funny. And when Gray's performances culminate in an absolutely absurd and brutal act of self-mutilation, Carrey can once again really reach top form.

The script written by Jonathan Goldstein and John Francis Daley, who is known as the actor in the series "Bones", is full of nice and funny ideas, which Scardino has implemented sometimes very obviously, sometimes a bit more hidden and which give the actors several times excellent possibilities to convince the audience of their comedic talent. The end result is an incredibly funny and charming comedy, which shows that you can be silly without having to be flat and dirty and that you can be biting without having to be mischievous and cynical. So if you are looking for light US comedy with a high gag density and can confidently do without the fecal humour that is unfortunately almost obligatory for American comedies at the moment, then the world of the "incredible Burt Wonderstone" is just right for you. Absolutely worth seeing!

Picture + sound: The Blu-Ray image is particularly pleasing with its very strong colors and a usually very good sharpness of detail, which only diminishes a little in the darker scenes. The sound of the German soundtrack is only available in a simple Dolby Digital 5.1 mix. This is a bit weaker than the English soundtrack with its 5.1 DTS-HD Master Audio Mix. However, the dialogues are mixed powerfully and in a way that is easy to understand, and the surround channels are also used quite a bit here and there. Good!

Extras: The bonus material for a current production is a bit lean, but quite amusing. We start with a special about Jim Carrey's magician Steve Grey (ca. 8:33 min.), followed by some amusing messed up scenes (ca. 4:08 min.). Then the real magician David Copperfield explains how he supported the makers in the development of the big number of Burt and Anton (ca. 8 min.). This is the only extra that comes closest to making of. Finally, there are 26 minutes of alternative or unused scenes to see, among which there are also some quite good laughs.

Fazit: "The incredible Burt Wonderstone" is not pure cinema magic, but a rather simply knitted comedy, which is often just uninhibitedly silly, but also really funny. The good actors and the extensive renunciation of the currently unfortunately so common faecal humor makes this humorous look at the world of show magicians an entertaining pleasure, in which Jim Carrey in particular can finally show himself in top form again - even if only in a supporting role. But there is a very clear one: Recommended!