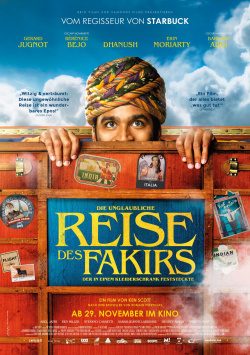 The incredible journey of the fakir stuck in a wardrobe

The young street artist Aja (Dhanush) always wondered who his father was. His mother never answered that question. But after her death, Aja finally sets out to search for herself, leading him from Mumbai to Paris. Here, shortly after his arrival, he meets the American Marie (Erin Moriarty), with whom he falls head over heels in love. But when he spends the night in a furniture store for lack of money, this is the beginning of a turbulent journey across the continent. He ends up in a wardrobe in England, where he is to be deported as an illegal immigrant. So he lands in Barcelona and the chances to learn more about his father and see Marie again, slowly but surely go towards zero. But Aja doesn't give up that easily…

"The incredible journey of the fakir stuck in a wardrobe" is director Ken Scott's attempt to stage a film that feels just as good as his surprise success "Starbuck" was. Sometimes he succeeds very well with the filming of the bestseller of Romain Puértolas. There are moments in this comedy that you just have to love. But other scenes, like a unfortunately not funny musical interlude with Ben Miller ("Johnny English"), just don't want to work out at all.

With Dhanush Scott has found a charismatic leading actor who has what it takes to play his way into the hearts of the audience. Scott, on the other hand, didn't prove such a good hand in implementing the story. Neither the search for his father, nor the romance between Aja and Marie are implemented in such a comprehensible way that the viewer is emotionally carried away. There are a few good laughs, a few touching moments and some original ideas. However, the emotional cohesion of the individual parts is missing, which is why the audience never really wants to be enthusiastic.

"The incredible journey of the fakir stuck in a wardrobe" is nice, harmless, but also a little trivial cinema entertainment. A film that doesn't hurt anyone, but that can't have any lasting effect either. If you just want to be sprinkled with a gentle sense of humour, this is the place for you. But that's all it is! Worth seeing

Kino Trailer zum Film "The incredible journey of the fakir stuck in a wardrobe (Frankreich/USA/Indien 2018)"
Loading the player ...