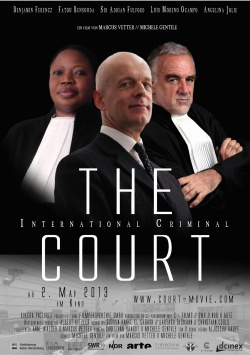 The adoption of the Rome Statute in 1998 was the cornerstone for the International Court of Justice in The Hague, which began its work in 2002. More than 100 states signed the statute in the hope that with the help of the International Court of Justice justice can also be brought to those countries in which their own legal system has collapsed due to wars or revolution. However, the implementation of this idea often proves to be very difficult, because not only do the defendants have to be captured and brought to The Hague. Often bureaucracy, lack of money and regime pressure stand in the way of a successful prosecution.

The filmmakers Marcus Vetter ("Cinema Jenin") and Michele Gentile accompanied the Chief Prosecutor Luis Moreno-Ocampo in his work between March 2009 and November 2012 and gained a very comprehensive insight into the difficult work of the Court, which they now want to bring closer to the general public in their documentary "The International Criminal Court". The initial situation was originally the question of the extent to which Israel and Hamas could be charged with war crimes in the Gaza War. Since the question of whether Palestine can be recognized as a state had to be clarified first, which is a prerequisite for a lawsuit, and since this process took an enormous amount of time, the filmmakers finally changed their focus to the negotiation against the Congolese warlord Thomas Lubanga Dyilo. The indictment of the warlord, who is said to have recruited child soldiers, was the first ICC case to be negotiated in The Hague.

However, the revolution in Libya and its bloody suppression are also becoming a topic for the chief prosecutor and his team. Luis Moreno-Ocampo knows very well that he must not only find solid evidence against the defendants, but also that he must promote the important work of the ICC. The hope that powerful states such as the USA, China and Russia will one day recognise the Court is just one of the great motivations behind such advertising. Prominent supporters such as Angelina Jolie or the idea of including Ben Ferencz, the chief prosecutor of the Nuremberg Trials, in the team for the Thomas Lubanga Dyilo case result from the effort to make the still young institution better known and, above all, more recognized.

The film is very unagitated in its tone, but remains rousing until the end. This is, of course, partly due to the stirring cases being dealt with here, but also to the fact that Luis Moreno-Ocampo is a very charismatic figure. Watching him work, investigate and lead his team is very exciting and very interesting. When you hear the name International Court of Justice in The Hague, you are inclined to believe that it is always very serious and somehow very special here. However, the fact that everyday work is completely normal in itself and that despite (or perhaps because of) the many terrible deeds with which the employees are confronted every day, there is also time for a relaxed and humorous get-together makes the institution and its employees much more tangible and accessible for the viewer.

As the film closes with the end of Luis Moreno-Ocampo's term in office, some questions remain unanswered and the feeling may arise that the documentary is more of a portrait of the chief prosecutor than of the ICC. Of course, this is a very small point of criticism of an otherwise very interesting documentation, which can be warmly recommended to anyone who is interested in the work of the ICC, despite some small lengths. Worth seeing