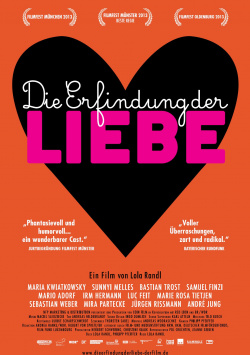 The Invention of Love

The totally unexpected death of the only 26 year old actress Maria Kwiatkowsky in July 2011 not only put an abrupt end to a young life and a promising career. Lola Randl's film "The Invention of Love", which was just shot with Kwiakowsky in the leading role, also had to be stopped after 23 days of shooting - apparently for good. But Randl didn't want to let the last work of her talented actress get dusty in the archives unappreciated. And so the script was rewritten and the shooting continued almost a year later. The result is a film that is as unusual and unique as the actress it honors.

Den Randl has created a wonderfully bizarre film-in-film story from "The Invention of Love", which at first seems slightly documentary, but then develops a very original life of its own. When the leading actress Nina dies, the shooting of a movie has to be stopped. The film was supposed to tell the story of the young couple Emily and Daniel, who sneak into the lives of rich amines to snatch their fortunes. After Emily saved the rich woman's life, but she didn't show herself to be very grateful for it, it's now up to Daniel to put the plan into action. He should win her heart, marry her and thus become her sole heir. After the death of Emily actress Nina, the screenwriter has to rewrite the story, especially since many of the most important scenes had not yet been shot. The decision that the set intern of all people should now take on the role of Nina doesn't make things any easier. The whole thing gets completely out of hand and the overstrained director has a hard time keeping the actors and the team in check. But the more the original story changes, the more chaotic the shooting becomes. More and more the borders between film and reality are blurring and at some point even the staff on set no longer know what reality is and what belongs to the film…

It was a courageous decision to continue "The Invention of Love" after the death of Maria Kwiatkowsky in such a drastically changed way. But that's exactly how the movie captures the very special character of its deceased main actress perfectly. It is unadapted, a little weird, but at the same time extremely stirring and profound. The fact that Lola Randl didn't take the path other filmmakers take in similar situations by filling the unexpected gap with doubles or CGI copies of the dead actors makes her film-in-film comedy not only a worthy memento of Maria Kwiatkowsky, but also one of the most original German works of the year.

Because while the play scenes completed in the first shoot reveal a rather conventional film, "The Invention of Love" has been given an unpredictability and a non-conformity by the scenes added in the second shoot, which is refreshing and testifies to a lot of creative passion and personal heart blood of all participants. This unconventional and relaxed way of dealing with what is actually a very sad affair not only delights the audience, but would certainly have made Maria Kwiatkowsky very proud as well. Lola Randl has created a film that meets all expectations, that is funny, biting but also a little bit melancholic and that can be warmly recommended as a wonderful overall package to all lovers of experimental Arthauskost from Germany. Worth seeing