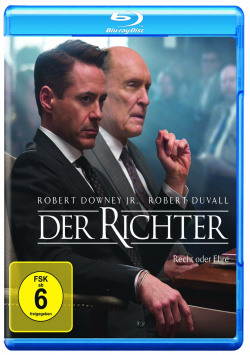 The Judge - Law or Honor - Blu-ray

Film: Hank Palmer (Robert Downey Jr.) is one of Chicago's most successful lawyers. He doesn't care that his clients are all guilty. After all, innocent people would not be able to afford his services anyway. But success also has its price. Hank's marriage is on the brink of collapse, which could finally break the already fragile relationship with his daughter. And Hank hasn't had contact with his family in a long time either. When he learns in the middle of an important trial that his mother has died, Hank reluctantly has to return to his small hometown. But it should only be a short flying visit, because he doesn't want to spend more time than necessary with his father (Robert Duvall), the respected judge of the town. But just as he gets back on the plane after the funeral to fly back to Chicago, a call from his brother (Vincent D'Onofrio) holds him back: His father was arrested because he is said to have caused an accident in which a man, who had once been imprisoned by the judge, died. Of course, the old man's far too proud to ask Hank for his help. But when the suspicion is confirmed that this is not an accident but a deliberate murder, father and son have to put aside their differences in order to save the judge from having to spend the rest of his life in prison. But the dedicated prosecutor (Billy Bob Thornton) seems to have all the trumps on his side and the air is getting thinner for Hank and his father...

Director Dave Dobkin, known for rather humorous subjects like "The Wedding Crashers" or "How changed", dares for the first time to tackle a rather dramatic subject with "Der Richter - Recht oder Ehre". The mixture of court film and father-son drama is also interspersed with lighter moments and amusing dialogues. But the basic tone of the film is rather serious, as the story also deals with topics like death, Alzheimer's and revenge. Dobikn's attempt to loosen the whole thing up again and again and then stretch it out with a pinch of romance and an extended family history doesn't always work, though. Especially the side story around Hank's little daughter is a bit too thick in terms of kitsch.

It's thanks to the first-class actors and the good dialogues of the script that the movie offers such good entertainment despite its obvious weaknesses. Of course, the focus is on Robert Downey Jr., who superficially plays only one variation of the same character. He does what he does best and it is always fun to watch him do it. The opening sequence, in which Hank talks the lawyer of the opposing party into the ground in the toilet of the court, is the perfect example of this. But on closer inspection, the "Iron Man" star shows many different facets of his skills, which he presents in a pleasantly restrained and well nuanced manner.

Having resisted the temptation to play his co-stars completely against the wall. This is why the scenes between Hank and his father offer great acting cinema. But also the smaller supporting roles are very well cast with actors like Billy Bob Thornton, Vera Farmiga or Vincent D`Onofrio. Leighton Meester, known from the series "Gossip Girl", shouldn't go unmentioned. Their role is very small, but during a car ride with Hank and his ex Samantha (Vera Farmiga) Meester really steals the show with her flirtatious game. A quite wonderful scene.

Admittedly, "The Judge - Right or Honor" suffers from the fact that Dobkin wants to tell too many stories at once. There are some scenes where you think that they will still have a certain meaning, but which then still run into nowhere. Therefore, almost two and a half hours running time would not have been really necessary. Dobkin would have done well to limit himself to the essentials and to opt for a somewhat tighter narrative tempo. Nevertheless, the lengths remain within bearable limits and despite some dramaturgical weaknesses, the movie as a whole offers very good entertainment. Those who like to wear it a little bit and love very classic court and family dramas with a pleasant pinch of humour will get their money's worth here. Therefore, the following also applies: Worth seeing!

Picture + sound: The technical implementation of Blu-ray is at a very high level. The image is absolutely clean and free of any interference. The image sharpness, the atmospheric colouring and the well balanced contrasts also leave a very good impression. The German sound is only available in a decent Dolby Digital 5.1 mix, which is perfectly sufficient for a rather quiet film like this, carried by dialogues. But in a direct comparison, the English DTS-HD MA Spur looks much more lively and also a little more powerful. Nevertheless, the bottom line for picture and sound is quite clear: Very good!

Extras: As a bonus there is a look behind the scenes (approx. 22:16 min.). This consists of a relaxed conversation between the makers and actors, as well as some film clips and recordings of the rehearsals and shooting. Supporting actor Dax Shepard also did not miss the opportunity to interview his co-stars Robert Downey Jr., Billy Bob Thornton and Vincent D`Onofrio on set, which led to a very amusing special (approx. 9:21 min.) on this Blu-ray. Furthermore, there are still some edited scenes (about 18:28 min.), which can be viewed either with audio commentary of the director (without subtitles) or without commentary (with subtitles). To the main movie itself there is still a quite interesting comment by David Dobkin, to which unfortunately there is no subtitle option.

Fazit: "Der Richter - Recht oder Ehre" is a family and court drama loosened up with some humor, which can score with some nice pictures and good actors. The only weak point is the fact that director David Dobkin wants to tell too many stories at once and thus loses himself in overflowing storylines. A few cuts would certainly have done the film some good. Nevertheless, for the Blu-ray, which presents the movie in appealing picture and sound quality and has some extras worth seeing, a very clear one applies: Recommended!