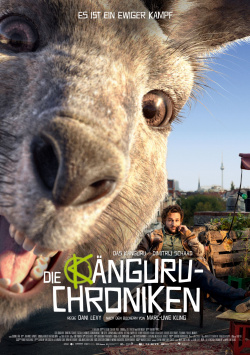 From now on to buy and borrow etc. available at iTunes, Prime Video

The unsuccessful small artist Marc-Uwe (Dimitrij Schaad) is not astonished when one day a kangaroo appears at his door. The cheeky creature, a self-confessed communist, then makes himself comfortable with the completely overtaxed Marc-Uwe and turns his life upside down. The new apartment in Kreuzberg, however, is soon in danger, as the house is to make way for the building project of a right-wing populist real estate shark (Henry Hübchen). Of course, the kangaroo can't allow that. Together with Marc-Uwe and the neighbours who are also threatened by the construction project, the right-wing sock is to be put in its place. Fortunately, the kangaroo already has the perfect plan for this…

With "The Kangaroo Chronicles" Marc-Uwe Kling started a true success story in 2009. The book version of the award-winning radio column "Neues vom Känguru" on Berlin's Radio Fritz quickly found a large fan base as a book and audio book, so that further volumes, sold-out live readings and several kangaroo games followed. And now the feature film, directed by Dani Levy ("Alles auf Zucker!") The first minutes are absolutely promising, as they transport the special humor of the books very well to the screen, while also playing with typical movie clichés in an original way.

The visual realization is also convincing. The animated kangaroo fits perfectly into the scenery. So far, so good. But the film quickly reveals some obvious weaknesses. What worked out really well in the short episodes of the first book, oftentimes was biting and also cryptic, seems to be anxious and above all frighteningly shallow here. Sure, there are some really amusing moments and fans of the books are guaranteed to be satisfied, too. However, the way AfD-Bashing is done with the very left wooden hammer here is simply not conducive to the (well-intentioned) cause.

Please do not misunderstand: The problem is not that the film has a clear political position. It's rather the way it does it. Instead of exposing and unmasking the politicians of a party like the AfD with intelligent, subtle humour, the film relies on really flat clichés. Simply telling the audience how stupid Nazis are is really not enough to grasp the complexity of the problem that not only our country is currently struggling with. And it's only partly really funny. Good on the left, bad on the right (and Reich) - unfortunately, this is far too one-dimensional thinking. Here, one wonders whether Levy and Kling did not trust their audience to grasp more subtle humour or whether they simply couldn't come up with anything better. For me, it all just seemed to me as if the makers here just wanted to pat themselves on the back, according to the motto: "Look here, we are the good guys, because we say that Nazis suck". And of course everyone who has money, also…

"The Kangaroo Chronicles" has good moments and will definitely attract enough fans to the cinemas to make this comedy a success. Yet, overall the humor is oftentimes very shallow, the plot too confusing and the characters too exaggerated for the film to become a successful satire. In any case, this bestselling adaptation would have had what it takes. At least: The numerous movie quotes are well done and are also fun. Nevertheless, the whole thing is only worth seeing for kangaroo fans!