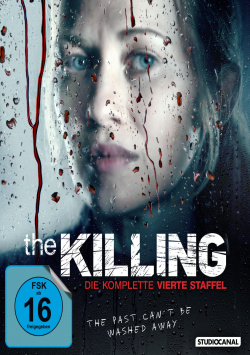 Film: Sarah Linden (Mireille Enos) and Stephen Holder (Joel Kinnaman) have no time to deal with the fatal events of the end of the third season. They are sure that they have covered their tracks, but at the latest when Lieutenant Skinner's daughter starts looking for her father, Linden's colleague Reddick (Gregg Henry) begins to doubt that the missing policeman is actually only on vacation. His investigation could be dangerous for Linden and Holder. But they don't have time to worry about it. For the cruel murder of the family of Kyle Stansbury (Tyler Ross), the cadet at a private military academy, demands her full attention. Especially since Colonel Margaret Rayne (Joan Allen), the head of the academy, is making their investigations increasingly difficult. When Holder also learns that his girlfriend Caroline (Jewel Staite) is pregnant and that he will soon not only be responsible for his life, the tense situation threatens to explode for good…

"The Killing", the celebrated remake of the Danish success series "Commissioner Lund - The Crime", finally says goodbye to its viewers after a bumpy road with the fourth season. Actually the series had already been cancelled by the US station amc after season 2 due to low ratings. After negotiations with Netflix and Twentieth Century Fox, the favourite critic was given another season. But since the odds were not right here either, the plug was pulled again. The fans were threatened with a farewell with a truly evil cliffhanger. In order to bring the series to a round conclusion, the streaming service Netflix then commissioned a six-part fourth season, which manages well to close the loop.

This last season is not the best of the series. And the end is perhaps a little too sweet. But at least the fans are offered a round and conciliatory conclusion. And two very exciting storylines, which offer almost six hours of thrilling, in their best moments even nerve-racking entertainment with great actors and an oppressively intense visual language. The crime Linden and Holder have committed at the end of season 3 is pushed a little into the background. She is always present, but still only takes up a small part of the first two episodes. Here the action is fully concentrated on the cruel murder of a family and the incidents behind the walls of the military academy.

Thanks to the intensive play of Joan Allen an extremely high level of tension is built up here, which only falls off again in the somewhat disappointing resolution. However, this isn't that bad, as the series finds its way back to its old quality at the moment when the investigation into Skinner's case points more and more towards Linden and Holden and the loop tightens more and more, which leads to an intensification of the tensions between the two. Here "The Killing" once again shows the viewer what first-class quality television is. The good actors still support this impression.

Whether it really needed the epilogue, let's put it there. However, it's a fact that "The Killing" ends with a really good season, which doesn't have to struggle with any lengths or unnecessary side plot strands just because of its brevity. Who already liked the first seasons and can accept small dramaturgical quality losses, that should absolutely seize here. Absolutely worth seeing!

Picture + sound: The technical implementation has changed little compared to the first season speakers. The colour scheme is extremely atmospheric, whereby the somewhat undercooled colours capture the oppressive mood of the story very well. The picture sharpness is on a good to very good level for a current TV series. Although many things take place in the gloom, smaller details often also come into their own. The DTS-HD Master Audio 5.1 Mix is also pleasantly atmospheric, with the voices sounding very directionally mixed. Ambient noises such as wind and rain and smaller sound effects ensure that the surround channels also get something to do. Good!

Extras: Bonus material does not have the last season to offer. Too bad!

Fazit: "The Killing" comes to an end with the fourth season of only 6 episodes. And even though these last episodes aren't the best of the series, the viewer is offered thrilling thriller entertainment on a very high level. Staged closely (by Oscar winner Jonathan Demme, among others) and played very well, there is not a minute of boredom in this gripping finale. If you liked the first three seasons, you can't get past this graduation. The Blu-ray is technically well implemented, but unfortunately there is no bonus material. Nevertheless, the bottom line is that it is enough for a very clear one: Recommended!