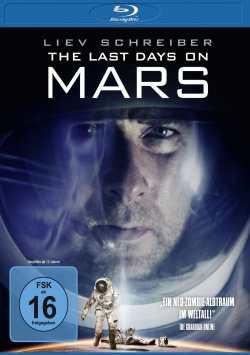 The Last Days On Mars - Blu-ray

Film: Is there life on Mars? This question, which humanity has been dealing with for many decades, is also addressed by an eight-member research team that has been searching the surface of Mars for even the smallest hint of any life for six months now. But the hoped-for success failed to materialize and now the long-awaited journey home to Earth is imminent. But a few hours before the departure, the researcher Petrovic (Goran Kostic) goes on a dangerous expedition on his own with his colleague Harrington (Tom Cullen, "Downton Abbey"), in the firm conviction that he has discovered fossil impressions of an alien life form. When the contact to the two breaks off, mission leader Brunel (Elias Koteas) and his crew set about saving Petrovic and Harrington. But the team has no idea what horror awaits them and that this could become a danger for all mankind...

With his feature film debut "The Last Days On Mars" director Ruairi Robinson has staged an atmospheric sci-fi thriller that tries to combine many well-known genre elements with a little zombie horror to an exciting mix. At the same time, he can build up a very atmospheric atmosphere at the beginning, which is reminiscent of the claustrophobic atmosphere of classics like "Alien". The film never even comes close to the class of Ridley Scott's masterpiece. In the end, the script is just too weak for that. However, Robinson knows very well how to compensate possible dramaturgical flaws with a very atmospheric production, so that in the end a quite gripping sci-fi horror is created.

This impression is also supported by the special effects, which are really neat for the rather small budget. The computer effects as well as the make-up and practical effects are convincing. The actors also all fight each other quite well, whereas there are no really outstanding performances here. Liev Schreiber, as well as Romola Garai ("Abbitte") or Olivia Williams ("The Sixth Sense"), who are more at home in costume films, all deliver solid performances. Clive Dawson's script, which is based on a short story by the British author Sidney J. Bounds, simply doesn't manage to breathe the necessary depth into the characters and thus real life into them. Even the existing tension potential is only marginally exploited.

The fact that Robinson and his team have created a well-functioning and exciting film despite the rather conventional and a little superficial scripts is a more than decent achievement. Unfortunately, "The Last Days On Mars" is a long way from becoming a space thriller like "Moon" or "Alien" because of the weaknesses in the script. But this mission to Mars has not degenerated into a scrap cucumber like John Carpenter's "Ghosts of Mars". So if you want to lower your expectations a little bit and just want to see some exciting, atmospheric sci-fi entertainment with effective horror elements, you will get a really well done movie. And there's a good one for that: Worth seeing!

Picture + Sound: The Blu-ray image is absolutely clean and has an extremely atmospheric color scheme. The high image sharpness allows even smaller details to be easily recognised and the contrast adjustment also leaves a positive impression. The DTS-HD 5.1 MA Mix is rather reserved in many moments, but this contributes to the build-up of tension. In some scenes, very effective sound effects are used, which provide a powerful surround feeling. Good!

Extras: As a bonus there is a short presentation of the visual effects (approx. 5:59 min.), some uncommented B-Roll recordings from the shooting (approx. 12:48 min.), as well as nine interviews (approx. 58 min.), all of which have a clear promo character, but also reveal some interesting details about the making of the film. Altogether a bit superficial, but at times quite revealing and worth seeing!

Fazit: "The Last Days On Mars" is a thrilling sci-fi thriller, which doesn't quite reach the level of its obvious role models, but convinces with a gripping atmosphere and some well done moments of tension. The Blu-ray presents the space zombie thriller in good picture and sound quality. The bonus material is a bit promo-heavy, but has some worth seeing moments to offer. All in all this is enough for a more than satisfied: Recommended!