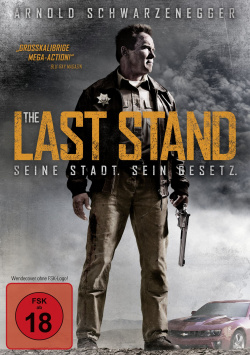 Film: In recent years, the "Terminator" quote "I'll be back" seemed to be Arnold Schwarzenegger's motto. No matter whether at political events as governor of California, at film premieres or interviews, whenever a microphone or a camera was nearby, Schwarzenegger let his "I'll be back" sound. Now he has finally followed his words with deeds and delivers with "The Last Stand" after small guest appearances in "The Expendables 1 + 2" his true comeback as an action star.

directed by Kim Jee-Woon ("I saw the Devil"), Schwarzenegger plays Sheriff Ray Owens, who provides law and order in the small town of Sommerton Junction near the Mexican border. Owens and his team don't have much to do. Rescuing a cat from a tree or writing down a wrong parker is already a highlight for the police of Sommerton Junction. But then the powerful drug boss Gabriel Cortez (Eduardo Noriega) manages to escape from the hands of the FBI during a prisoner transport. And his way to Mexico will take him through Sommerton Junction of all places. Although FBI agent John Bannister (Forest Whitaker) doesn't believe that a horde of small-town cops can stop the drug kingpin and his men armed to the teeth. But since his attempts to arrest Cortez again fail miserably, Owens is soon the only one left standing between the gangster and his Mexican refuge. And so a bloody duel threatens, in which the drug baron and his army are only apparently at an advantage...

"The Last Stand" almost seems like an advertising film of the American weapons lobby. The absurd statement of an NRA spokesman that a bad man with a gun can only be stopped by a good man with a gun seems to be the overriding leitmotif of the film, as a lovable granny sometimes reaches for the hump to support Arnie in her fight against the bad boys. "The Last Stand" could therefore certainly be seen as a contribution to the current discussion on the tightening of weapons law in the USA. And in view of the terrible events that have claimed so many innocent lives in recent months, it is difficult to see a film like "The Last Stand" not as a political issue, but as a simple entertainment film. But since Kim Jee-Woon doesn't want to make a political statement, but wants to entertain in a quite simple, but effective way, genre fans shouldn't question the whole thing, but just switch off the brain. Because only then they can enjoy this absolutely solid thriller with good action, some humor and wonderfully illogical shootouts.

Whether it's the spectacular escape of the drug boss, the modern western-like duel of good against evil in the middle of the almost extinct small town, or the way Arnold Schwarzenegger flirts with his age, all this makes "The Last Stand" an extremely entertaining representative of his genre. Some scenes literally overshoot the mark. Especially the character of the weapon fool Lewis, who is embodied by "Jackass" Johnny Knoxville, is really exaggerated and sometimes seems a bit too silly. The film never really takes itself seriously. But Knoxville's capers, although occasionally quite amusing, often seem like a foreign body in the otherwise very harmonious overall picture due to their over-twisted nature.

Although "The Last Stand" as a whole looks like a representative of the classic 80s action cinema, the action itself never seems dusty or antiquated. The limits of logic are repeatedly overridden. Nevertheless, the car chases, the gunfights and duels are worth seeing and extremely entertainingly staged, which also comforts the very clichéd character drawing and the rather simple dialogues.

Whoever manages to switch off the brain when inserting the DVD and activate it again only after the credits, who doesn't question the whole thing too much, gets a good action cinema here with an Arnold Schwarzenegger, who still knows his craft well. On DVD and Blu-Ray the film appears in different variants, whereby the Uncut version released starting from 18 should be given preference in any case. The cuts, which were made for a FSK 16 version, are limited, but still cloud the fun of the action noticeably. And that's why the following applies first and foremost to the 18th version: well worth seeing!

image + sound: The visual realization of the film shows slightly exaggerated contrasts, but otherwise pleases with a high image sharpness and an atmospheric, earthy coloration. The Dolby Digital 5.1 Mix has good surround effects like gunfire or explosions to offer in many moments, but also the rather centrally mixed dialogues powerfully reproduced. Good!

Extras: In addition to a good making of (about 27 min.) and an interview with Arnold Schwarzenegger (about 5:32 min.) the DVD also features six edited scenes (about 8 min.), but the special effects haven't been finished yet. Especially in a scene where there should be a spectacular car stunt to see, this makes for involuntary comedy. Seven extended scenes (approx. 13 min.) and uncommented B-Roll recordings (approx. 3:30 min.) round off the additional offer.

Fazit: "The last Stand" is a solid action thriller of the old school, which is neither particularly profound nor extremely original. Nevertheless, Kim Jee-Woon's Hollywood debut is a very entertaining genre contribution, with which Arnold Schwarzenegger makes a quite convincing comeback as an action star. The DVD presents the explosive events in good picture and sound quality and also has a few worth seeing extras on board. And for that there is, although the movie isn't the big one, a quite satisfied one: Recommendable!