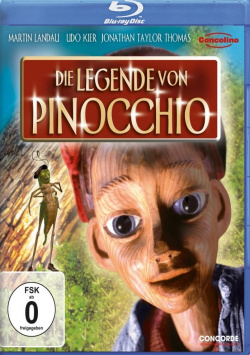 The legend of Pinocchio - Blu-Ray

Contents: There are apparently countless adaptations of Carlo Collodi's book "The Adventures of Pinocchio", published in 1883, the story of the wooden figure carved by wood carver Geppetto, which must endure many exciting and fantastic adventures in order to become a real boy of flesh and blood. In 1996 the Irish director Steve Barron, who had previously celebrated respectable successes with the films "Turtles" and "The Coneheads", dared to create his own interpretation of the material, in which Geppetto (Michael Landau) had to sell his talking puppet to the sneaky puppet theatre owner Lorenzini (Udo Kier). When he causes a big fire at his first performance, Pinocchio tries to escape the clutches of evil Lorenzinis. But he has completely different plans for the puppet, which culminate in a great adventure full of danger and magic...

"The Legend of Pinocchio" was shot with a quite respectable budget of almost 25 million dollars on picturesque backdrops in the Czech Republic, Croatia and Great Britain. Visually, the fairy tale is absolutely convincing and its visual effects are still pleasingly contemporary even after more than 15 years. How the makers brought the little puppet to life here is absolutely impressive. The humor is a bit overdone here and there and a bit too colorful, especially when Rob Schneider, who isn't well known for his comedic subtlety, stumbles through the scenery as a fox. This is a bit annoying for adult viewers, but for kids it's a lot of fun.

Anyway, Barron has created a movie that serves its young target group absolutely well. There are cute characters (the cricket), loosening up humor of the child-appropriate kind, not too creepy tension and a beautiful story with a lovable hero. For the new release the whole thing was also converted into 3D, so that the viewer now also has the choice whether Pinocchio's nose should protrude directly into the living room while lying, or whether the original two-dimensional optics is not completely sufficient.

No matter whether in 3D or 2D, "The Legend of Pinocchio" is a visually wonderfully realized fairy tale and a very successful adaptation of the famous story. If you are looking for an adventure for young and old children that takes its audience for 90 minutes into a colourful fairy tale world, you should definitely let Steve Barron tell you "The Legend of Pinocchio". Worth seeing!

Picture + sound: The picture and sound quality leave a very positive impression for the fact that the film has already been on the hump for several years. The image is very clean, the coloration very powerful and the sharpness in most scenes is on a very high level, so that even smaller details are shown to advantage. And also the DTS-HD 5.1 MA Mix, newly mixed for the Blu-ray, proves to be extremely lively and transports not only the dialogues, but also the numerous smaller and larger sound effects well from the home cinema boxes. Good!

Fazit: "The Legend of Pinocchio" is a lovely adaptation of the popular story of Carlo Collodi. It's true that the humor drifts a bit into silliness here and there, which also makes the staging seem a bit childish. But all in all Steve Barron has succeeded in creating a pretty fairy tale with great show values. They still work surprisingly well after 17 years, although the digital revision for this release is also very positive. And if you want to have Pinocchio's nose right in your face, you can also grab the newly created 3D version of the film. Recommended