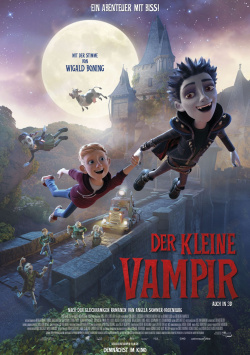 It's Rüdiger's birthday. He'll be 13 years old. Where other children would literally explode with joy at gifts, cakes and birthday parties, Rüdiger is just frustrated. Cause he's a vampire and he's celebrating his 300th birthday. He therefore has no desire at all for a big family party in the big tomb in Transylvania. But soon the little vampire has completely different worries: through a stupidity his brother Lumpi accidentally lures the vampire hunter Geiermeier and his assistant Manni to the tomb of the vampires, which the nasty man imprisons there. Only Rüdiger, his sister Anna and his parents manage to escape to relatives in the Black Forest. This is where 13-year-old vampire fan Anton is on vacation. When Rüdiger and Anton get to know each other, it soon becomes clear, after initial distrust, that together they are the only chance for the imprisoned vampire clan. A dangerous adventure begins that could be the beginning of a very special friendship…

You can really hear how the production meeting for the animated version of "The Little Vampire" went down: "We absolutely have to make the story cooler. And there must also be very small children in it, they bring money. So don't get too creepy! And beautiful 3D effects, as a lot of action. And don't forget: It has to be somebody's fart, the children always find it funny" And so the whole thing has become a harmless, conventional animation adventure according to scheme F. Children will like that, but the film doesn't even come close to the charm of the books. This is because there are no ideas of their own and the figures are absolutely interchangeable.

I still remember exactly why I loved the books of Angela Sommer-Bodenburg so much as a child. Not only was Anton a well elaborated identification figure for children. The author has always struck the right balance between humour and suspense. It was exciting that the friendship between Anton and the little vampire had to remain a secret, because not all vampires were as dear as Rüdiger. As a reader, you could really get creepy, but you were also excited when the bloodsuckers had to get to safety from Geiermeier. The fact that the vampires in the new film are all actually good hearted and Geiermeier only a completely overdrawn joke figure, takes the appeal of the whole story.

The makers are playing it too safe to get anywhere. And when it comes to humour, you rely on the simplest tricks from the moth box and even let a cow fly in the end. It's a shame, because there is a really good template that could have been modernized easily and that would have worked really well in the cinema. It's really sad that the beautiful and thrilling basic idea is so watered down that it becomes an uninspired little movie, that every second of the movie is chummed up by the alleged mass taste. Well, the little ones will like’s as I said, and that?s why with pain in my heart there?s also a teeth grinding for the target group: Worth seeing