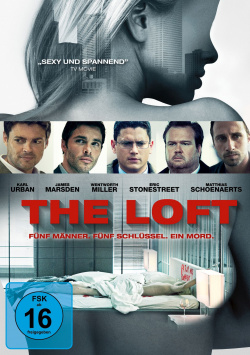 Film: All good things are three! After the 2008 original from Belgium and the Dutch remake from 2010, the third version of the thriller by director Erik van Looy is now released with the US adaptation of "The Loft". For the second time van Looy is directing it. But already with the Dutch version he sat on the director's chair for a few days for the injured filmmaker Antoinette Beumer. To stage this material might have almost become something of a routine for him. And that's exactly how the US remake works: like an experienced but somewhat passionless thriller with some good moments of tension.

The story hasn't changed in any of the three variations: It was supposed to be the perfect retreat for five married friends: a loft in a luxury residential complex where men can do everything their wives shouldn't know about. But one day, when they find a badly damaged corpse in the loft, the fun comes to an end. Mutual suspicions and murderous intrigues are causing the situation to escalate soon...

With the thriller "The Alzheimer Case" director Erik van Looy was able to land a small surprise hit at various festivals in 2003. With his successor "Loft", the director had proven that he really mastered his craft. And this is still clearly noticeable in the US version. With a nested narrative style that repeatedly jumps back and forth between the present and various moments of the past, van Looy creates an elegantly filmed puzzle that captivates the viewer to the end. Admittedly, there are one or the other pitfalls and some turns of action seem somewhat arbitrary at first glance. But at the end "The Loft" proves to be a first class thriller, that more than once manages to surprise its audience - provided, of course, that you haven't seen either of the other two versions yet. Because the US version is a 1:1 remake of the Belgian original from a few small differences and a somewhat more virtuous handling of sex and nudity.

The third version of the story still has everything a good thriller needs: an exciting story, a surprising resolution, tingling eroticism and a noble look. Also the cast around Karl Urban ("Lord of the Rings") and James Marsden ("X-Men") is well chosen. And yet the film lacks the corners and edges that the original still had. The US version seems a bit too smooth and the director lacks the certain passion that van Looy had revealed at the first attempt. The whole thing just seems like an exchangeable commissioned work, which was delivered solidly in terms of craftsmanship, but also somewhat soullessly. Does "The Loft" make a bad movie? No, because the story is still exciting, the look atmospheric and also the actors are convincing. Only those who can draw a direct comparison will really be bothered by the weaknesses. Otherwise, this third infusion also offers enough good thriller entertainment. But if you have the choice between the three existing variants, you might want to go for the original. Therefore: an exciting story in a somewhat too experienced package, therefore only worth seeing with small restrictions!

image + sound: The image of the DVD pleases with a high image sharpness, which can usually be maintained even in the rather dark scenes. The reduced coloring in many scenes underlines the undercooled atmosphere of the movie very well. The sound remains rather restrained over long distances, but here and there music and smaller sound effects provide some dynamics in the surround range. Good!

Extras: In addition to the trailer for the film and other program tips, the DVD also has uncommented B-Roll footage of the "Philips Wedding" scene (approx. 1:07 min.) and seven promo interviews (approx. 33:16 min.) with the actors. Pure standard program, which doesn't offer very profound information.

Fazit: "Loft" is an exciting thriller, which can only be recommended to viewers, who don't know the 2008 original from Belgium or the Dutch remake yet, because also the US version is a nearly identical new edition. But if you don't know the story yet, you can warmly recommend this also very well done version of the cleverly constructed thriller. The DVD is technically well done, the bonus material is okay, but not very profound. Altogether there is a clear one for this DVD: Recommended!