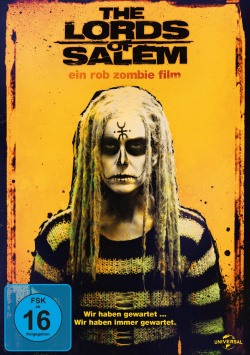 The Lords of Salem - DVD

Contents: Living in the small town of Salem is not exactly exciting for Heidi (Sheri Moon Zombie). Walks with her dog and visits of self-help groups determine her everyday life. Only her job brings some colour and variety into the single woman's life. As part of a DJ trio, she works every evening at the local radio station to counteract the daily dreariness with lively slogans and hot music. One day, when she receives a box containing a scarf of a band called "Lords", Heidi thinks it's a nice promo present, which she of course likes to play in her show. But when she puts on the record and the sounds spread through the ether, an old curse is released, which was imposed 300 years ago by the witch Margaret Morgan and her "Hexenzirkel der Six" over the city. And suddenly Heidi finds herself in a horror scenario she couldn't have imagined in her worst nightmares...

After the musician, author, producer, comic-strip artist and director Rob Zombie with his "Halloween" remake and its sequel has delivered two larger studio productions, which have exhausted him creatively, he delivers with "The Lords of Salem" again a much smaller, but also more unconventional flick. He doesn't just express his love for horror movies by casting genre oldies like Ken Foree ("Dawn of the Dead"), Dee Wallace ("Das Tier"), Meg Foster ("Sie leben") or Patricia Quinn ("Rocky Horror Picture Show"). Also the very clear references to movies like Polanski's "Rosemary's Baby" or David Lynch's "Twin Peaks" show that Zombie loves and respects this subject. And that's exactly what makes his movie interesting and worth seeing for fans of older genre works.

However, the staging also proves to be a bit bulky, as the straightforward staging at the beginning turns more and more into an almost psychedelic trip. And that's a bit exhausting at times, whereas the script isn't strong enough to compensate for these weaknesses. Zombies' earlier work was far from being straight mainstream horror. But so far his films have not been so experimental.

Also it becomes dramaturgically clear at some points that the production had to overcome some difficulties - such as the poor state of health of Richard Lynch, who was cast as Reverend John Hawthorne and died a short time later, or the retirement of Billy Drago and Bruce Dern shortly before the shooting - and that the film was actually a bit longer (scenes with guest stars like Udo Kier, Sid Haig or Clint Howard all fell victim to the scissors). The overall picture doesn't look quite round and there are still too many questions left unanswered at the end.

It can't be denied that the end has a certain charm and also leaves the viewer with goose bumps. But all in all, the well done aspects and the rather exhausting, less convincing moments balance each other out, which in the end is only enough to make it "worthwhile to see with some cutbacks" - and that only for fans of Rob Zombie's movies!

image + sound: The image is dominated by earthy tones, which are sometimes enriched at the end by brighter, but very powerful color accents. The sharpness of the picture is on a good level over long distances, although here and there small details get lost in the mostly quite gloomy events. The Dolby Digital 5.1 mix proves to be pleasantly lively thanks to the soundtrack and some overall atmospheric sound designs, although in many scenes it's the frontally mixed dialogues that set the tone.

Extras: Bonus material is unfortunately not available on the disc.

Fazit: "The Lords of Salem" is much more experimental than Rob Zombie's "Halloween" movies. This makes the horror flick on the one hand more interesting, but also a little more bulky than the director's last works. Still: the reunion with genre oldies like Ken Foree, Patricia Quinn or Dee Wallace, as well as some almost psychedelic sequences make the movie worth seeing, despite some obvious weaknesses. The technical realization is very atmospheric, only bonus material the disc unfortunately doesn't have to offer. For Rob Zombie fans, who can do without the bloody sides of his movies, it's worth seeing!